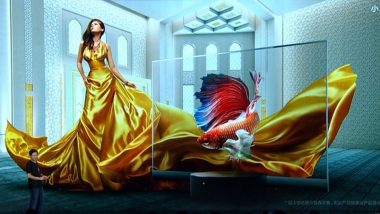 Chinese gadget manufacturer Xiaomi on Wednesday unveiled its first-ever transparent TV. The product, named as Mi TV LUX OLED, would be first be sold in China. The company is considering to export the product in other countries as well in the days to come. Here are some of the design and technology features of the one-of-a-kind TV set.

"Mi TV LUX Transparent Edition is our pursuit of making the coolest product ever and the vision to become the coolest company in our customers' hearts," said a statement issued by Xiaomi after the product launch. Xiaomi MIUI 12 Officially Launched in India, Checkout the List of Smartphones Getting MIUI 12 Update This Month.

The TV has a 5.7mm ultra-thin body, along with a display size of 55 inches. The television set would appear as a transparent painting on the wall on which it is fixed. Apart from displaying the cable and other televised inputs, it could also be used for browsing images and text messages by connecting through the smartphone.

The TV will run on the software version of "MIUI", designed specifically for television sets by Xiaomi. The product promises high-resolution picture quality, and is powered by MediaTek’s 9650 chipset that’s paired with AI Master Smart Engine image processing system.

Although the Mi TV LUX OLED is the first transparent TV manufactured by Xiaomi, similar products were earlier released by Samsung and LG. The 'Frame TV' of Samsung, which is also known for the transparent feature, is currently priced at Rs 74,490 in the Indian market. LG's transparent OLED Digital Signage is available only for businesses and not retail consumers.

(The above story first appeared on LatestLY on Aug 12, 2020 08:25 PM IST. For more news and updates on politics, world, sports, entertainment and lifestyle, log on to our website latestly.com).