OnePlus Buds Pro has been confirmed to be launched in India along with the Nord 2 smartphone on July 22, 2021. OnePlus Buds Pro users will be able to toggle noise cancellation by holding down the stem of the left or right earbud. 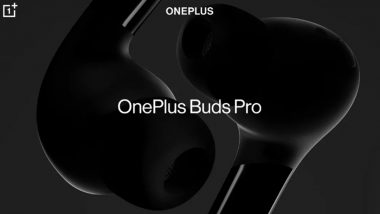 OnePlus Buds Pro has been confirmed to be launched in India along with the Nord 2 smartphone on July 22, 2021. According to a report from CNET, the company revealed that upcoming earbuds will feature high-end specifications. One of those features will be 'Adaptive Noise Cancellation. It will use three microphones that will monitor exterior noises allowing it to then intelligently produce noise-cancellation counter frequencies. The earbuds will then be able to modify how much noise cancelling is required. CNET shared an image of the upcoming earbuds which reveals a similar design as that of Apple AirPods Pro. It will be made available in matte black colour combined with a matte and glossy finish. OnePlus Nord 2 Smartphone’s Design Renders Emerge Online Ahead of Launch: Report.

OnePlus Head of Research & Development, Kinder Liu, has reportedly mentioned that the company has been working on the Buds Pro since July 2020. OnePlus aims to make the best user experience possible. OnePlus Buds Pro will not only offer active noise cancellation but also other top-tier features. Liu also revealed that the battery life of Buds pro with its charging case will be up to 28 hours with adaptive noise cancellation turned on and up to 38 hours when it is turned off.

OnePlus Buds Pro users will be able to toggle noise cancellation by holding down the stem of the left or right earbud. OnePlus phone users will also be able to access this feature via the HeyMelody app on the Android or iOS platforms. The company reportedly claims that a 10 minute wired charge on the Buds Pro will offer 10 hours of battery life. Moreover, it will also be charged wirelessly with a Qi-wireless charger but not at Warp charging levels. Apart from this, nothing more is known. OnePlus will officially announce the price and other details of the TWS earbuds on July 22.

(The above story first appeared on LatestLY on Jul 16, 2021 01:23 PM IST. For more news and updates on politics, world, sports, entertainment and lifestyle, log on to our website latestly.com).