Earlier today, it was reported that OnePlus will soon launch the OnePlus Ace device. Now, the company has teased the 'More Power to You' event on its official Twitter account. 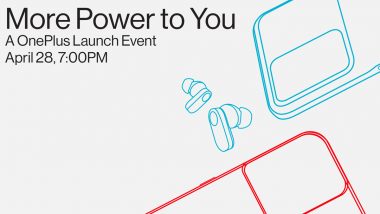 Earlier today, it was reported that OnePlus will soon launch the OnePlus Ace device. Now, the company has teased the 'More Power to You' event on its official Twitter account. The teaser reveals sketch images of a smartphone and earbuds. The event will take place on April 28, 2022, at 7 PM IST. Though the company has not revealed the products it will be launching. reports have claimed that the smartphone and earbuds shown in the teaser will be Nord CE 2 Lite and Nord Buds. OnePlus Ace With 160W Charging, Dimensity 8100 SoC Spotted on Geekbench: Report.

The OnePlus Nord CE 2 Lite is said to be a watered-down version of Nord CE 2 5G. Both products are also teased on Amazon India, which confirms that they will be sold via the e-commerce platform. OnePlus India website has also set up a dedicated page for the More Power to You event. Tipster Mukul Sharma claims that he spotted OnePlus Nord CE 2 Lite, OnePlus Ace and OnePlus 10R on the official website.

Get your hands on the power of getting more from life with an array of OnePlus devices. Launching on April 28. Stay tuned!

OnePlus Nord CE 2 Lite is likely to feature a 6.59-inch FHD fluid display, a Snapdragon 695 SoC paired with up to 8GB of RAM and up to 256GB of internal storage. The handset might sport a triple rear camera setup comprising a 64MP primary lens. Upfront, there could be a 16MP selfie camera. On the other hand, OnePlus Nord Buds is rumoured to come with a 41mAh battery. The earbuds could come with a half in-ear style design and a pill-shaped charging case.

(The above story first appeared on LatestLY on Apr 11, 2022 05:13 PM IST. For more news and updates on politics, world, sports, entertainment and lifestyle, log on to our website latestly.com).