Oppo F21 Pro Series launch event will begin in India today at 5 PM IST. Ahead of the launch event, the pricing of the Oppo F21 Pro smartphone has been leaked online by a tipster. 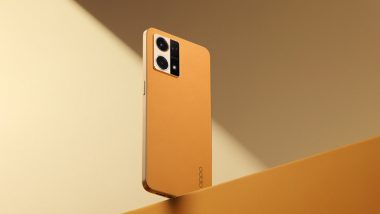 According to Sharma, Oppo F21 Pro will come with a box price of Rs 27,999 for the 8GB + 128GB model. The device will be made available in rainbow spectrum, cosmic black and orange colours.

In terms of specifications, Oppo F21 Pro is likely to sport a 6.43-inch AMOLED display, a Snapdragon 680 coupled with up to 8GB of RAM and 256GB of internal storage.

The handset could pack a 4,500mAh battery with 33W SuperVOOC fast charging support and might run on Android 12 based ColorOS skin out of the box. For photography, Oppo F21 Pro is said to sport a 64MP primary lens and a 32MP selfie camera.

(The above story first appeared on LatestLY on Apr 12, 2022 04:53 PM IST. For more news and updates on politics, world, sports, entertainment and lifestyle, log on to our website latestly.com).