One in five smartphone users' data usage could reach more than 200GB per month on a 5G device by 2025, said the Ericsson "ConsumerLab" report. 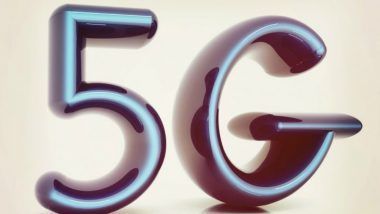 New Delhi, May 7: Smartphone users are willing to pay a 20 per cent premium for 5G services, while half of early adopters would pay as much as 32 per cent more, says an Ericsson study on Tuesday. One in five smartphone users' data usage could reach more than 200GB per month on a 5G device by 2025, said the Ericsson "ConsumerLab" report.

Average world smartphone data usage in 2018 stood at 5.6GB per month and is expected to increase to 21 GB per month in 2024, an increase of roughly four times from today's usage. Reliance Jio To Bring 5G Handsets Bundled With 5G Services Next Year - Report.

The research revealed that consumers expect 5G to provide relief from urban network congestion in the near term -- especially in megacities, where six in 10 smartphone users report facing network issues in crowded areas.

The respondents also anticipate more home broadband choices to be available with the launch of 5G. Smartphone users estimate that overall video viewing across mobile or portable screens while being out of home will increase by around three hours per week -- from 6.5 to nine hours - in the next five years, of which one hour will be on Augmented Reality (AR)/Virtual Reality (VR) glasses by 2025, the report said.

"Consumers clearly state that they think smartphones are unlikely to be the sole solution for 5G," Jasmeet Singh Sethi, Head of ConsumerLab, Ericsson Research, said in a statement. Globally, 50 per cent of consumers believe that smartphones will still exist but that perhaps everyone will be wearing AR glasses by 2025.

This latest Ericsson ConsumerLab study is based on 35,000 interviews with smartphone users aged 15 to 69, carried out in 22 countries including India. The views of the participants are representative of almost one billion people, Ericsson said.

(The above story first appeared on LatestLY on May 08, 2019 08:25 AM IST. For more news and updates on politics, world, sports, entertainment and lifestyle, log on to our website latestly.com).