Today’s stay and play at home with popular past google doodle is Lotería, the Mexican card game, which was introduced in 2019. Users can play the classic Lotería game with friends in a private match or match with users around the globe at random. 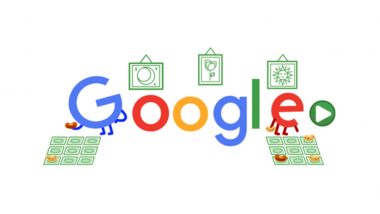 Google is bringing back its popular doodle games for users to stay engaged and kill boredom while being at home. The outbreak of coronavirus has forced people to stay indoors. So that people do not get too bored or they utilise their time at home and entertain themselves, the search giant has launched a throwback doodle series. Each day, a Google Doodle appears with a throwback game, where an individual is allowed to play with the illustration. Today’s stay and play at home with popular past google doodle is Lotería, the Mexican card game, which was introduced in 2019. Users can play the classic Lotería game with friends in a private match or match with users around the globe at random. How to Play Popular Google Doodle Games? Stay and Play Lotería Game at Home, Here Are List of Other Past Google Doodles From Cricket to Coding.

The Google Doodle Lotería game was illustrated by guest artists, Mexico-based Chabaski, Mexico-born Cecilia, Hermosillo-born Luis Pinto, Los Angeles-based Loris Lora, and Mexico City-based Vals. The doodle game Lotería in Spanish means lottery, is a card game of chance, quite similar to bingo. The game was first originated in the 15th century. Lotería first moved to Spain before reaching Mexico in 1769. It is a famous game across Mexico and Latinx communities, whether as a Spanish language tool or for family game night. US Teacher Appreciation Week 2020 Google Doodle: Search Engine Giant Thanks Educators with a Special Illustration.

The Lotería multiplayer game can be played on the Google browser with friends in a private match or match with users around the world, at random. Each player gets a card with 16 images on the. The aim of the game is to match the four images in a row or column on the ‘tabula’ with the cards picked from a deck of 54 by the announcer. The player who gets four matching images, in a specified pattern marked by the token beans, wins.

Google is undoubtedly keeping users busy in the right manner at the right time. It is much needed for all of us to divert our attention from the ongoing events, at least for once a day, and engage in entertaining ourselves with something different. Google re-launched a series of doodle games on April 27, with a playable doodle, making a comeback every other day. So, stay and play at home with popular past Google Doodle games.

(The above story first appeared on LatestLY on May 05, 2020 08:47 AM IST. For more news and updates on politics, world, sports, entertainment and lifestyle, log on to our website latestly.com).