The much awaited Realme 2 Pro smartphone is expected to feature Snapdragon 660 SoC, waterdrop notch, 8GB of RAM and much more. 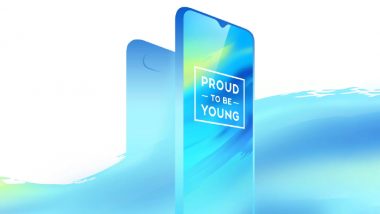 After parting ways from Oppo, Realme launched the new Realme 2 smartphone in India at an attractive price point of Rs 8990. To keep the momentum going, the Chinese smartphone maker will be rolling out the Pro version of the Realme 2 tomorrow, which is expected to be a major upgrade. The company announced the arrival of Realme 2 Pro edition on the launch event of Realme 2. The launch event of the smartphone is scheduled to commence at 12PM IST. Likewise Realme 2, the new Realme 2 Pro will also be retailed online exclusively via Flipkart. Realme 2 Pro Specification Details Revealed on Geekbench ahead of India Launch on September 27.

Based on the images teased by the company, the new Realme 2 Pro smartphone will sport a Dewdrop Full Screen display making it the first phone from the company to feature such notch on top of the panel. Also, the smartphone will be flaunting the gradient design language that is expected to be similar to that of Oppo F9 Pro. Though Oppo F9 Pro also features a gradient design at the back, it is also rumoured that Realme could add a regular glass back. The company has also confirmed that the device will feature a dual camera module at the back, however, the company not revealed the lens configurations yet. OnePlus 6T India Launch Invite Leaked Online; Reveals October 17 As Official Launch Date.

A recent teaser also revealed that Realme 2 Pro will be offered with an 8GB RAM variant. Under the hood, the dual-SIM smartphone will be powered by a Qualcomm’s Snapdragon 660 chipset along with artificial intelligence. Vivo V9 Pro Smartphone Launched; Priced in India at Rs 19,990; Here’s How You Can Get Rs 2000 Off on New V9 Pro.

(The above story first appeared on LatestLY on Sep 26, 2018 02:20 PM IST. For more news and updates on politics, world, sports, entertainment and lifestyle, log on to our website latestly.com).