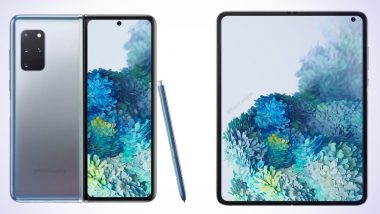 If the market reports are to be believed, the Galaxy Fold 2 will come with a bigger external display, ultra-thin glass protection, and S Pen support. As per the report by a South Korea publication, Samsung is considering August 5 as the launch date for the Samsung Galaxy Note 20 series and Samsung Galaxy Fold 2 smartphones.

Samsung will reportedly not be hosting its traditional physical Unpacked event in New York, but may instead opt for launching the devices digitally. Previously, Samsung in its Q1 2020 earnings report hinted the Galaxy Note 20 series and Galaxy Fold 2 will be launched in the second half of 2020.

On the other hand, the Galaxy Fold 2 from Samsung is expected to be launched in the price bracket of $1,880 to $1895 (which is approximately Rs. 1.44 lakh). The company is expected to commence the shipping by September. Aesthetically, the Galaxy Fold 2 will be seen with the same book-like open shut design. However, the smartphone will be seen with a bigger display upfront, better cameras, S Pen and 5G support.

(The above story first appeared on LatestLY on Jun 06, 2020 10:55 PM IST. For more news and updates on politics, world, sports, entertainment and lifestyle, log on to our website latestly.com).