Samsung Galaxy Tab A7 Pre-Orders to Begin in India on September 28, 2020 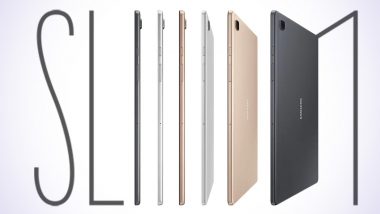 New Delhi, Sep 25: South Korean giant Samsung is geared up to launch its mid-segment, affordable Galaxy Tab A7 in India next week in the price band of Rs 20,000-Rs 25,000 for its highest variant. Industry sources told IANS on Friday that the pre-booking for Galaxy TabA7 will start on September 28 and the device will go on sale early next month. The Galaxy Tab A7 comes with a 10.4-inch screen and Qualcomm Snapdragon Octa-core processor paired with 3GB RAM. Samsung Galaxy F41 Smartphone to Be Launched in India on October 8, 2020; Specifications & Features Revealed.

Tab A7 is likely to come in two memory variants of 32GB and 64GB, with consumers having the option of increasing memory to 1TB using the microSD card. The Tab A7 sports a 7040mAh battery for long-lasting performance. Besides the online education segment, Samsung is also targeting users who love to watch movies and videos on the go with Tab A7.

Samsung that recently launched premium Galaxy Tab S7+ and Tab S7 devices in India to maximise productivity with multi-tasking, has made an aggressive push for its tablet business in the country. Galaxy Tab A7 will be sold through Samsung.com, major e-commerce platforms as well as retail stores across the country, sources said. In the June quarter (Q2) this year, Samsung garnered 29 per cent market share in India, a whopping 143 per cent growth (QoQ). Samsung Tab A series did really well, with the Galaxy Tab A 10.1 LTE and Wi-Fi (2019) series contributing close to 25 per cent of its market share, according to CMR's ‘Tablet PC Market Report Review for Q2 2020'

(The above story first appeared on LatestLY on Sep 25, 2020 04:49 PM IST. For more news and updates on politics, world, sports, entertainment and lifestyle, log on to our website latestly.com).