When attacked, they open their mouth quickly as wide as possible to reveal their evidently coloured tongues. Study reveals that those tongues are even more fascinating than they appear. 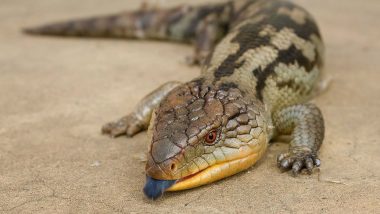 Can you vision a lizard with Ultra Violet intense tongue? Generally, when faced the jaws of a hungry predator, this electric blue-tongued skink, also known as blue-tongued lizard uses its tongue to warn hunters. The fearless little reptile challenges threat in its area with the tremendous display of its tongue. Yes, they are famous for its colourful gob, but researchers found out its secret power! When attacked, they open their mouth quickly as wide as possible to reveal their evidently coloured tongues. Study reveals that those tongues are even more fascinating than they appear.

A team of researchers discovered how this blue-tongued skink deters the enemies. As the final attempt, it shows the back of its tongue, which is more UV-intense and bright as compared to the tip. This could be a useful defence against its main hunters, such as birds, snakes and also monitor lizards which are thought to have UV vision. Researchers Arnaud Badiane, Pau Carazo, Samantha J, Price-Rees, Manuel Ferrando-Bernal, Martin J. Whiting of Macquarie University in Australia has published this study in Behavioural Ecology and Sociobiology. Using a portable spectrophotometer, which is used to measure the strength of light, researchers measured the tongues of about 13 skinks where they discovered that the back of the tongue was twice as bright as the front.

The lead author Arnaud Badiane said in a statement online, “The lizards restrict the use of full-tongue displays to the final stages of a predation sequence when they are most at risk, and do so in concert with aggressive defensive behaviours that amplify the display, such as hissing or inflating their bodies.” He further added, “This type of display might be particularly effective against aerial predators, for which an interrupted attack would not be easily resumed due to loss of inertia.”

These blue-tongued lizards are found around Australia, Indonesia and Papua New Guinea. it is said that they are usually camouflaged, but after examining its tongue closely, researchers found how these lizards ward off attackers.

(The above story first appeared on LatestLY on Jun 08, 2018 01:35 PM IST. For more news and updates on politics, world, sports, entertainment and lifestyle, log on to our website latestly.com).