Partial Solar Eclipse on 11th August 2018: Will There Be Any Online Live Streaming Available for This Eclipse?

The eclipse will be visible clearly to those living in Antarctica and countries like Argentina, Chile and southern parts of Uruguay, Paraguay, and Brazil. 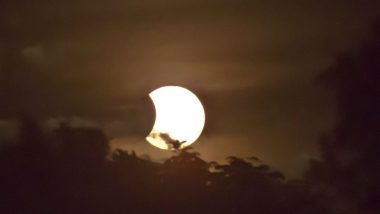 Those interested in celestial events enjoyed the lovely spectacle of the Blood Moon Eclipse which took place. Now another celestial event will occur, this time the Sun being covered under the shadows. The partial solar eclipse will take place on August 11. This is the third and also the last eclipse of the year 2018. The Sun will be partially covered in the Moon's shadow. The phenomenon, however, cannot be viewed from India.

According to a report, "During the eclipse, the so-called New Moon will partially pass in front of the Sun, obscuring as much as 65 per cent of the star in certain parts of the world." Partial Solar Eclipse, February 2018: When, Where and What Time to Watch The Celestial Event?

Regarding watching the solar eclipse, there are a lot of constraints. One needs to have proper access to the equipment. You cannot watch it with your naked eye. A telescope with proper filters or a pinhole camera is a must to watch the solar eclipse. While NASA organises a live streaming of such events at all times, this time the space organisations hasn't. While it is not confirmed it seems that there will be no live streaming of the event.

The reason is that the partial eclipse is for a very short duration, hence any telescope or camera has not been pointed on the sun. Also, the partial eclipse will be visible only in remote parts of the world. It will be visible clearly to those living in Antarctica and countries like Argentina, Chile and southern parts of Uruguay, Paraguay, and Brazil. Residents near the Falkland Islands will also be able to witness the entire event. The entire eclipse will take two hours from 5.43pm local time UTC to 7.34pm in the Antarctica Peninsula.

(The above story first appeared on LatestLY on Aug 10, 2018 09:33 PM IST. For more news and updates on politics, world, sports, entertainment and lifestyle, log on to our website latestly.com).