Water on Asteroid Itokawa: Organic Materials Essential for Life on Earth Discovered for the First Time Ever on Surface of Space Rock 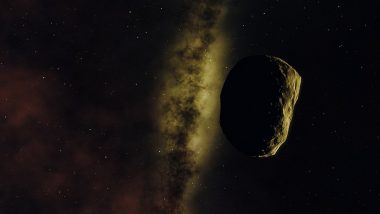 When you hear about asteroids, mostly it contains the fear of Earth approaching doomsday. Every now and then, there are reports making headlines as to how the space rocks are heading towards our planet, but flying past closely, thankfully without causing any damage. However, there is something interesting that might change your view on these space rocks. A team of researchers discovered water and organic matter on the surface of an asteroid sample collected from the solar system. Yes, you read that right. The organic materials which are essential for life on Earth are found for the first time ever on the surface of asteroid Itokawa.

Japan Aerospace Exploration Agency (JAXA) in 2010 brought the single grain sample on Earth from the asteroid Itokawa, as part of its Hayabusa mission. The samples show the traces of water, and organic matter that originates from the asteroid itself have evolved chemically through time. The findings suggest that the asteroid is continually evolving for billions of years, and the water and organic material must be derived from foreign extra-terrestrial material.

Researchers from Royal Holloway, University of London, note that the asteroid has weathered extreme heat, dehydration and shattering, but managed to re-form, using material it picked up while evolving from the inner solar system. The study also shows that the S-type asteroids, which are the most common ones that come to Earth, can contain raw life components. The scientists’ research, titled, “Organic matter and water from asteroid Itokawa,” was published in the journal Scientific Reports.

“After being studied in great detail by an international team of researchers, our analysis of a single grain, nicknamed ‘Amazon’, has preserved both primitive (unheated) and processed (heated) organic matter within ten microns (a thousandth of a centimetre) of distance,” Dr Queenie Chan from the Department of Earth Sciences at Royal Holloway was quoted saying in a statement.

Scientists believe, the findings could help to rewrite our knowledge of the history of life on Earth, which previously focussed on carbon-rich C-type asteroids. Besides, this is also the first time organic materials, which could have provided chemical precursors for the origin of life on Earth, was found in an asteroid.

(The above story first appeared on LatestLY on Mar 05, 2021 07:41 PM IST. For more news and updates on politics, world, sports, entertainment and lifestyle, log on to our website latestly.com).