Australia: Sydney sealed off with latest uptick in COVID-19 cases 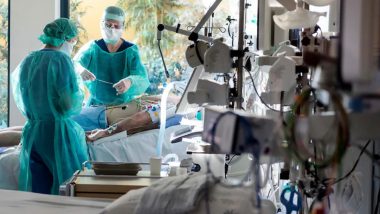 The health department recorded 10 new local cases in the past 24 hours till 8:00 p.m. Tuesday night, among which seven were already announced on Tuesday but included in Wednesday's figures. There were another 13 new local cases reported after 8:00 p.m. Tuesday night who will be counted in Thursday's official statistics. There are 31 cases linked to a local cluster, according to the health authorities, the Xinhua news agency reported.  Mandatory Mask Rules Extended in Sydney as COVID-19 Cluster Grows

Eight out of the 13 cases that came in after 8:00 p.m. on Tuesday were linked to a party in Sydney's west.

From 4:00 p.m. on Wednesday, residents in Sydney and surrounding areas will only be allowed five visitors in their homes, restaurants will be restricted to sit-down dinners, and no singing or dancing will be allowed except for weddings which will be allowed a maximum of 20 people.

Beyond this, outdoor seated events, including all sporting events, will have the capacity reduced to 50 per cent and residents in many of Sydney's metropolitan areas will be barred from non-essential travel outside Sydney.

"We know the effect. This will have on residents and venues but we must take this action now to ensure we keep on top of this outbreak," NSW Premier Gladys Berejiklian told the press.

Despite the increased threat, Berejiklian continued to rebuff the idea of putting Sydney under lockdown.

"We know the virus is circulating in particular around those local government areas, the unlinked cases, all those cases that are under investigation are all from that geographic proximity, so this is important and proportionate action at that we are taking to prevent further spread," she said.

With this latest uptick in cases across NSW, many states in Australia and neighbouring country New Zealand have imposed new travel restrictions on Sydney.

The New Zealand government has suspended its travel bubble with Sydney for 72 hours from Wednesday, which came after an Aussie traveller tested positive after travelling from Sydney to New Zealand's Wellington on June 19.

The Australian state of Queensland's government also announced that as of 1:00 a.m. on Thursday, Queensland will close its borders to a number of areas across Sydney and NSW.

The Australian state of Victoria, after recording zero locally acquired cases on Wednesday, has also restricted travel from a number of areas in Sydney.

(The above story first appeared on LatestLY on Jun 23, 2021 12:04 PM IST. For more news and updates on politics, world, sports, entertainment and lifestyle, log on to our website latestly.com).