Azerbaijan, Armenia Clash Over Disputed Nagorno-Karabakh Region: All You Need to Know About The Territorial Conflict

Azerbaijan and Armenia on Sunday engaged in clashes over the disputed Nagorno-Karabakh region, leading to civilian casualties both sides. 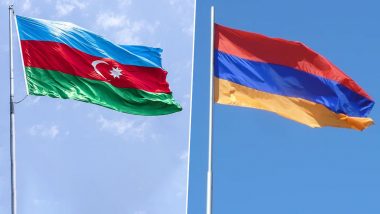 Baku, September 27: Azerbaijan and Armenia on Sunday engaged in clashes over the disputed Nagorno-Karabakh region, leading to civilian casualties both sides. Armenia claimed to shoot down two Azerbaijani helicopters, while Azerbaijan said it launched "counter-offensive" after attacks by Armenian separatists. Armenia accused Azerbaijan of attacking civilian settlements in Nagorno-Karabakh, which is internationally recognised as part of Azerbaijan but is controlled by Armenian forces.

Amid clashes with Azerbaijani forces, Armenian Prime Minister Nikol Pashinyan has declared martial law and total military mobilization. Both the countries accused each other of triggering violent clashes. Russia's Foreign Ministry called for an immediate ceasefire and talks between Armenia and Azerbaijan to stabilise the situation.

History of Conflict Between Azerbaijan And Armenia Over Nagorno-Karabakh:

Azerbaijan Armenia were part of the Soviet Union before its collapse in 1991. Both the countries have been locked for decades in a territorial dispute over Nagorno-Karabakh. While the disputed region is internationally recognised as part of Azerbaijan, Armenian forces hold control over it. The conflict intensified after ethnic Armenians in Nagorno-Karabakh declared independence following the Soviet Union's collapse.

Armenian engaged in a war with Azerbaijan and seized Karabakh. The battle resulted in 30,000 deaths. In 1994, a ceasefire was agreed. However, Azerbaijan and Armenia frequently accuse each other of attacks around Nagorno-Karabakh and along the separate Azerbaijan-Armenia frontier. The Minsk Group, which includes France, Russia and the United States, made failed attempts to mediate a settlement of the conflict.

(The above story first appeared on LatestLY on Sep 27, 2020 03:41 PM IST. For more news and updates on politics, world, sports, entertainment and lifestyle, log on to our website latestly.com).