Boris Johnson Threatens to Leave EU Without Deal: What No-Deal Brexit Means and How It Will Impact UK-Europe Ties

If the EU and UK fail to sign a deal by December 31, 2020, and also fail to extend the period for negotiating the withdrawal agreement, the no-deal Brexit would come into effect. The biggest loss for the UK would be its departure from the Single Market and Customs Union of the European conglomerate. 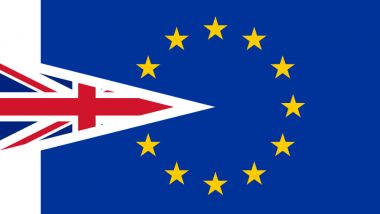 London, October 16: The possibility of a no-deal Brexit, which is expected to severely hit trade ties between the European Union and the United Kingdom, looms as Prime Minister Boris Johnson lashed out at the EU leadership on Thursday for "not considering" the fundamental concerns raised by the UK. In an unprecedented announcement, Johnson told reporters today the country should begin preparing for an exit from the conglomerate without a deal.

Johnson had, in August, announced a deadline of October 15 to ink a Brexit deal. The Tory government had resolved to leave the EU by 2020-end without a deal if no agreement is reached with the conglomerate by the aforementioned date. European Union Starts Legal Action Against UK Over Internal Market Bill.

After the round of talks failed to find a breakthrough on Friday, the UK PM said his country would walk out of the post-Brexit trade talks without a deal unless there is a "fundamental change" in EU's approach. A chance of rapprochement exists, based on the outcome of the meeting between EU and UK government officials in London next week.

Britain Ready to Walk Away With No Deal: Johnson

VIDEO: Prime Minister Boris Johnson says Britain is ready to walk away from post-Brexit trade talks with a "no-deal" unless the European Union shifted its position pic.twitter.com/AGc44oF3RM

What Is No Deal Brexit?

A no-deal exit from the European Union comes into effect if a member nation finalises the decision to leave the conglomerate without signing a withdrawal agreement.

Under Article 50 of the Treaty on EU, a period of two years would be given to any member nation for finalising the exit deal before completing the divorce. The two-year period could be increased if the EU members along with leaving nation agrees.

If the EU and UK fail to sign a deal by December 31, 2020, and also fail to extend the period for negotiating the withdrawal agreement, the no-deal Brexit would come into effect.

The biggest loss for the UK would be its departure from the Single Market and Customs Union. The Great Britain would be considered as a "third country", and would be subjected to the same import taxes as other non-EU members around the globe. The duties are as high as 90 percent for lamb imports.

The EU, according to reports, is considering to subject UK to full Customs regulations from January despite the UK suggesting that it would be implement a Customs regime for EU products in a phased manner over six months.

Business operating across the conglomerate, with interests also based in the UK, would also be hit due to no-data sharing agreement. While the same is on the cards under the Withdrawal Agreement, under a no-deal Brexit, the EU would prevent companies from sharing data with the UK unless it finds adequate data safeguarding measures adopted by Britain.

Transport is another area that would be severely affected by a no-deal Brexit, as road travel between EU nations and the UK would be severely regulated. Only a limited number of lorries would be allowed to ferry goods and services unabated on both sides. This in turn would lead to logistical issues, thereby hitting the supply chain network.

The railway mode of transport is expected to be hit whether the UK leaves the EU with a deal or without a deal. Both the sides would need to adopt a new rail policy from 2021. Air travel would also be affected in either cases as EU-based carriers would not be allowed to operate intra-UK flights and vica versa.

In absence of a withdrawal agreement, several UK-based investors will find a hard time to smoothen their business activities in the EU. The costs are expected to go up as the companies of UK would be required to registered as "third country" outfits. The regulatory costs would also be accordingly imposed.

(The above story first appeared on LatestLY on Oct 16, 2020 08:25 PM IST. For more news and updates on politics, world, sports, entertainment and lifestyle, log on to our website latestly.com).