Prime Minister Boris Johnson has been tested positive for Coronavirus. His 32-year-old girlfriend Carrie Symonds who is now pregnant has been living above Boris Johnson’s coronavirus ‘war rooms’ in No.11 Downing Street, Westminster. 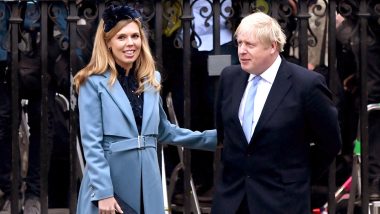 UK Prime Minister Boris Johnson has been tested positive for Coronavirus. His 32-year-old girlfriend Carrie Symonds who is pregnant with couple's first child has been living above Boris Johnson’s coronavirus ‘war rooms’ in No. 11 Downing Street, Westminster. As Boris and Carrie were staying together, it has raised concerns among well-wishers about the latter's health. Reportedly, she has only been going to walk her dog Dylan out in nearby St James' Park but was spotted with Johnson last week. At present, she has cancelled her birthday party as well. There are reports of Carrie Symonds to have left couple's Downing Street house and is self-isolating with their dog Dylan. Boris Johnson, United Kingdom PM, Tests Positive For Coronavirus.

Johnson in a video on social media said that he developed mild symptoms over the past 24 hours, including temperature and cough. He is self-isolating in Downing Street but said he will "continue to lead the government's response via video-conference as we fight this virus". Johnson was last seen on Thursday night outside No 10 clapping as part of a nationwide gesture to thank NHS staff. However, tweets inquiring about Symonds' health is being shared widely on social media. UK PM Boris Johnson Urges Britons to Use Video Calls to Celebrate ‘Mothering Sunday’ as COVID-19 Accelerates.

Very sorry indeed to hear @BorisJohnson has coronavirus. What a worrying time for him, not to mention @carriesymonds and their baby-on-the-way. Get well soon Boris!

Concerned For The Expecting Mother

Amen to this. No one, NO ONE would wish this on anyone. I hope PM stays well and that Carrie Symonds and baby are unaffected. https://t.co/zj3cc6WSvP

Get well soon @BorisJohnson - your country needs you! I particularly hope @carriesymonds is keeping safe and well - what a tough time to be pregnant. All good wishes to you both

Going to put my kind head on and wish @carriesymonds all the best. Whatever your political views, being in early-ish pregnancy and having your partner diagnosed with coronavirus is pretty scary. Be well Carrie x

Earlier in a video shared on his official Twitter account, the 55-year-old Boris Johnson said, "I'm working from home and self-isolating and that's entirely the right thing to do. But, be in no doubt that I can continue thanks to the wizardry of modern technology to communicate with all my top team to lead the national fight-back against coronavirus. I want to thank everybody involved and, of course, our amazing NHS staff."

Over the last 24 hours I have developed mild symptoms and tested positive for coronavirus.

I am now self-isolating, but I will continue to lead the government’s response via video-conference as we fight this virus.

Together we will beat this. #StayHomeSaveLives pic.twitter.com/9Te6aFP0Ri

The PM's staff has also been living in the offices of Downing Street. According to The Sun, an insider at No10’s war rooms described Britain’s coronavirus battles as an "a race against time".

Who is Carrie Symonds?

United Kingdom Prime Minister Boris Johnson's fiancee Carrie Symonds is a senior advisor to an ocean conservation charity, Oceana. Symonds grew up in East Sheen, southwest London, and attended the private girls' school Godolphin and Latymer in Hammersmith. She earned a first-class degree in theatre studies and art history and thereafter joined the Conservative Party as a press officer after university in 2009.

She has also worked with a special adviser for senior Members of Parliament including Sajid Javid. At 29, Carrie became communications director for the Conservatives Party. In 2018, she was named the second most important person in political communications. After leaving her job at the Conservatives, Symonds became a senior adviser for Oceana, where she is working towards protecting marine life and reducing plastic pollution. We hope Boris Johnson recovers quickly and that Symonds is taking good of her health and stays healthy.

(The above story first appeared on LatestLY on Mar 27, 2020 07:40 PM IST. For more news and updates on politics, world, sports, entertainment and lifestyle, log on to our website latestly.com).