The Yangtze boasts rich biodiversity and mineral and water resources in its basin, But overfishing and pollution have long threatened its aquatic life and depleted its fish stocks. 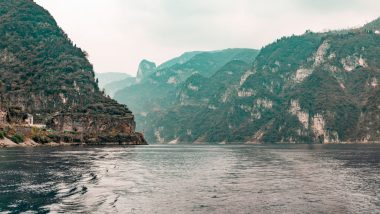 Beijing, March 1: The Yangtze River conservation law took effect on Monday amid China's intensified efforts to protect its "mother river". With 96 provisions in nine chapters, it is the country's first legislation on a specific river basin, reports Xinhua news agency.

The new law strengthens oversight as well as the prevention and control of water pollution in the Yangtze River basin.

For the economic and social development of the Yangtze River basin, efforts will be made to promote well-coordinated environmental conservation and avoid excessive development, while ecology shall be prioritized, according to the law.

Stretching over 6,300 km, the Yangtze boasts rich biodiversity and mineral and water resources in its basin. Drying Up of Yangtze River to Effect Environment, Economy Drastically, Say Researchers.

But overfishing and pollution have long threatened its aquatic life and depleted its fish stocks.

Fishing for productive purposes is banned in the aquatic life conservation areas of the Yangtze basin, the law stipulates, adding that within the time limit prescribed by the state, productive fishing for natural resources is banned in key Yangtze waters including its main river, major tributaries and lakes, and designated estuary areas. Mumbai Power Outage Reason Could be Chinese Cyberattack, Says Study by US Research Organisation.

Joint law enforcement efforts will also be made to tackle illegal sand mining, according to the law.

The law was adopted on December 26, 2020, by the Standing Committee of the National People's Congress, the country's top legislature.

(The above story first appeared on LatestLY on Mar 01, 2021 06:44 PM IST. For more news and updates on politics, world, sports, entertainment and lifestyle, log on to our website latestly.com).