China Expediting Efforts To Expand its Nuclear Arsenal as Beijing Concerned About Threat Posed By US, Says Report

China is expediting efforts to expand its nuclear arsenal as Beijing is seriously concerned about the threat posed by the US, a media report said. 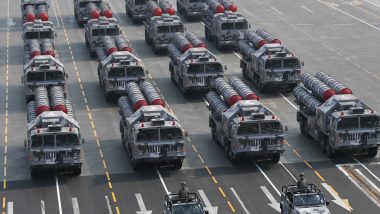 Beijing, April 11: China is expediting efforts to expand its nuclear arsenal as Beijing is seriously concerned about the threat posed by the US, a media report said.

According to The Wall Street Journal report, the Chinese leadership made a strategic decision to beef up the country's nuclear deterrence long before the current conflict in Ukraine.

However, the latest events in Europe, as well as the increasingly confrontational rhetoric between Beijing and Washington over Taiwan, have prompted an acceleration of the programme, RT reported.

As further proof of its claims, the report also cites satellite imagery of more than 100 suspected missile silos in one of China's western regions, where increased activity has been detected, RT reported. The newspaper surmises that these facilities could hold China's new long-range DF-41 missile, which was put into service in 2020.

This type of missile can carry a nuclear warhead and is capable of reaching the US mainland, the report noted. China Plane Crash: China Eastern Airlines Boeing 737 With 133 Onboard Crashes in Guangxi Province; Here's What We Know So Far.

According to the sources cited in the Journal report, the Chinese authorities now suspect that Washington's endgame is the toppling of the Chinese Communist Party, and that the US might be willing to take greater risks to stop China's rise. Additionally, Beijing is reportedly concerned that Washington could deploy its nukes should a military conflict break out over Taiwan.

The report concludes by citing a retired Chinese military official, who said that "no matter how the situation develops in the future, the world will be more confrontational", meaning that "China definitely needs to maintain nuclear deterrence".

(The above story first appeared on LatestLY on Apr 11, 2022 02:56 PM IST. For more news and updates on politics, world, sports, entertainment and lifestyle, log on to our website latestly.com).