China has under reported its COVID-19 cases as per a leaked document. It shows that the country has not made the real data on number of coronavirus patients public. The document comprised of 177 pages has been provided by an insider of the Hubei Provincial Center for Disease Control and Prevention, which was at the epicentre of the outbreak. 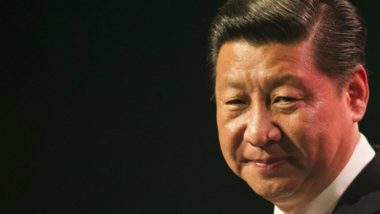 New Delhi, December 1: China has under reported its COVID-19 cases as per a document  handed over the CNN by a whistle blower. The leaked document shows that the country has not made the real data on number of coronavirus patients public. The document comprised of 177 pages has been provided by an  insider of the Hubei Provincial Center for Disease Control and Prevention, which was at the epicentre of the outbreak. The whistle blower described themselves as 'a patriot' who was 'motivated to expose a truth that had been censored, and honor colleagues who had also spoken out.' 1 Year Since Coronavirus Outbreak: First Case of COVID-19 Traced Back to November 17, 2019 in China's Hubei Province.

The document revealed that Hubei was in the midst of a major flu epidemic at the time coronavirus outbreak. The province was reporting up to 20 times the normal number of seasonal flu cases in December 2019, majorly in Yichang and Xianning, followed by Wuhan.  It also shows that a large number of flu cases, including in Wuhan, were diagnosed as 'unknown cause' - dating a far back as December 2, 2019.

It reported that Hubei health authorities were under-funded and suffering staff motivation issues when the pandemic struck. Despite China's claims that it had highly invested in the early-stage detection of infectious diseases in 2003 during the SARS epidemic, in reality the system was slow, under-funded, and weighed down with bureaucracy. COVID-19 Cases Rise in Shanghai; Hundreds of Flights Cancelled at China's Pudong Airport to Control Infection.

Yanzhong Huang, a fellow at the Council on Foreign Relation told CNN: "It was clear they did make mistakes." "Not just mistakes that happen when you're dealing with a novel virus, also bureaucratic and politically-motivated errors in how they handled it. These had global consequences," he added.

China had acknowledged only 44 cases in 2019. However data shows that the number of cases actually reported were 200. Similarly on March 7, Hubei officially reported 83 cases, but 115 are recorded in the leaked papers. The report clearly showed that China in an attempt to hide the outbreak thereby leading to a global pandemic.

According to the report, nucleic acid tests which were initially used to  test the virus in China,   worked between 30 per cent and 50 per cent of the time. Scientists were , therefore  forced to use other methods - such as scans of the lungs - to diagnose patients they were sure had the virus, but whose tests kept coming back negative. China publicly reported only the cases  cases which had been confirmed by the test. All other cases were marked down as 'suspected' or 'clinically diagnosed'.

While bureaucrats would have been aware of both figures, and may have been aware of the problems with testing, they chose only to report cases with a positive test - at least initially, according to CNN. China started adding 'clinically diagnosed' cases to its totals in mid-February, only.

(The above story first appeared on LatestLY on Dec 01, 2020 05:04 PM IST. For more news and updates on politics, world, sports, entertainment and lifestyle, log on to our website latestly.com).