hundreds of flights at Shanghai’s Pudong Airport has been cancelled on Tuesday due to rise in local COVID-19 infections. According to reports, the cluster was linked to cargo handlers. 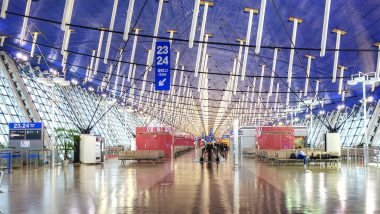 Shanghai, November 24: In the wake of rise in COVID-19 cases, hundreds of flights at Shanghai’s Pudong Airport has been cancelled on Tuesday. Notably, Pudong is one of China’s busiest airports. The decision to cancel flights were taken to control local coronavirus outbreak. Recently, a small cluster of Covid-19 cases in the city was reported.

According to reports, the cluster was linked to cargo handlers. Thousands of staff at the airport were also tested on Monday. According to a report published in global news agency AFP, over 500 flights out of Pudong Airport were cancelled. Meanwhile, half of the scheduled flights were also cancelled. COVID-19 Samples on Frozen Seafood: China Detects Traces of Coronavirus on Frozen Pomfret Packets Imported From India.

Close to 18,000 airport staff had been swabbed by Monday. The infected people include employees at logistics firms FedEx and UPS, reported AFP. A video of Chaos at the Pudong airport also surfaced on social media on Monday. Almost half of all scheduled flights were also cancelled at Tianjin International Airport. COVID-19 Vaccine Made in China Administered to a Million People: Official.

The Chinese mainland reported 20 new imported COVID-19 cases on Monday, bringing the total number of imported cases to 3,804. Four new imported cases each were reported in Fujian and Guangdong, three each in Shanghai and Sichuan, two each in Jiangsu and Shaanxi, and one each in Inner Mongolia and Henan, the National Health Commission said in its daily report on Tuesday. China is also conducting mass screening to curb the infection.

(The above story first appeared on LatestLY on Nov 24, 2020 06:13 PM IST. For more news and updates on politics, world, sports, entertainment and lifestyle, log on to our website latestly.com).