China's National Security Law in Hong Kong: What Has Changed And Why The Legislation Has Led to More Protests? 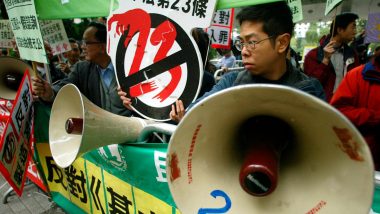 What is China's National Security Law in Hong Kong?

The National Security Law gives China unprecedented powers it has never had before. The controversial legislation has six chapters consisting of 66 articles. It deals with four categories of offences – secession, subversion, terrorism, and collusion with a foreign country or external elements to endanger national security. The maximum penalty for each crime is life imprisonment, although, in some minor offences, the suggested punishment is less than three years' imprisonment. Hong Kong Police Make First Arrests Under National Security Law Imposed by China.

Under the National Security Law, China can extradite a suspect to the mainland if the case involves "complicated situations" of interference by foreign forces; the local government cannot effectively enforce the law or national security is under "serious and realistic threats". Moreover, any person convicted under the law will not be allowed to stand as a candidate in the elections for Hong Kong's Legislative Council.

Notably, in November 2019, the pro-Democracy candidates won a landslide victory against pro-China candidates in the district council elections. The controversial law has been enacted when a few months remain for the next district council elections. Critics say China will use the National Security Law to arrest and intimidate anti-Beijing and pro-democracy activists and politicians in Hong Kong.

The language of the controversial legislation is extremely vague. Article 29 states that anyone who conspires with foreigners to provoke "hatred" of the Chinese government, or the authorities in Hong Kong, could have committed a criminal offence. It is not clear whether criticism of China's ruling Community Party can be treated as a crime under this provision. Article 55 gives Chinese mainland security operatives the right to investigate some national security cases that are "complex", "serious" or "difficult". In simple words, China can investigate anyone in Hong Kong with no accountability.

The National Security Law makes China an extra-constitutional authority in Hong Kong. The legislation allows China to set up the Office for Safeguarding National Security in Hong Kong. This office will be operated by a staff consists of mainland Chinese personnel. Article 60 states that anyone who works there does not have to abide by Hong Kong's laws. They shall not be subject to "inspection, search or detention".

Article 41 allows trials in secret and Article 44 states that judges can be picked by Hong Kong's chief executive, who is answerable directly to Beijing. Moreover, under Article 46, trails can be held without a jury. "People will be so petrified, so frightened and intimidated, that they wouldn't dare say anything or do anything in opposition," Claudia Mo, an opposition lawmaker in Hong Kong, was quoted by BBC as saying.

Under the "one country, two systems" agreement, the United Kingdom handed over Hong Kong to China in 1997. It was then decided that certain rights will be guaranteed and protected for at least 50 years. The UK believes that Beijing's move violates Hong Kong's autonomy, threatens the freedoms and rights protected by the joint declaration, and is in direct conflict with the territory's Basic Law, its mini-constitution.

Britain's Prime Minister Boris Johnson has offered Hong Kong residents citizenship in the wake of the imposition of China's National Security Law. Johnson said the passing of the law was a "clear and serious breach" of the 1985 Sino-British joint declaration. In response, China has threatened "corresponding measures" to block the citizenship plan.

(The above story first appeared on LatestLY on Jul 02, 2020 04:39 PM IST. For more news and updates on politics, world, sports, entertainment and lifestyle, log on to our website latestly.com).