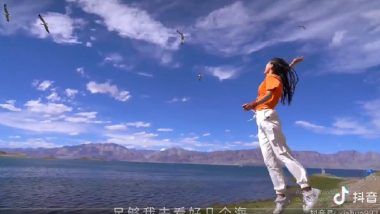 New Delhi, September 7: Amid the ongoing border standoff between Indian and Chinese soldiers in Ladakh, an advertisement video shared by unverified Twitter users claimed that China will facilitate the return of international tourists to Pangong Tso. The video appeared as a propaganda exercise of Beijing, as it featured a Chinese national along with an audio narration in Mandarin.

The 45-second footage showed the scenic landscape of the Pangong Tso region. The 134-km lake stretches over two countries - India and the Autonomous Region of Tibet which is politically controlled by China. 'China Can't Lose An Inch Of Territory, India Responsible For Escalating Tension': Chinese Defence Minister Wei Fenghi To Rajnath Singh.

The ad video, which has received several retweets, were uploaded by users who used both Mandarin and Chinese as medium of communication. Although they appeared to be handles managed by Chinese nationals, it could not be confirmed as none of accounts were verified by Twitter.

'3 Idiot' Reference In An Apparent Bid to Provoke

You only need to take a Chinese visa to enjoy cold air, flocks of birds and blue water.

We have also placed a monument on a place where movie 3 idiots was made.

"You only need to take a Chinese visa to enjoy cold air, flocks of birds and blue water. We have also placed a monument on a place where movie 3 idiots was made. Come, visit and enjoy China," one of the Twitter users said, referring to the blockbuster Indian movie '3 Idiots' which features scenes shot at the Pangong Tso lake.

Even though the ad video appears to have been produced in China, it could not be ascertained whether the clip is new or old. Notably, no official mouthpiece of the Chinese government or any of the semi-official media outlets of China have shared the footage.

The web portal of leading Indian news channel Times Now, however, claimed that the video is emanating from handles linked to the Chinese Communist Party (CCP). The claim could not be verified.

Pangong Tso region has emerged as the fresh friction point between India and China. A flare-up was reported on August 29 when Chinese soldiers reportedly attempted to transgress into territories held by India in Ladakh. The incursion bid was effectively thwarted, said a statement issued by the Indian armed forces. The government in New Delhi reiterated its commitment to resolve the border row through dialogue, but added that attempts to unilaterally alter the status quo would be neutralised.

(The above story first appeared on LatestLY on Sep 07, 2020 12:54 AM IST. For more news and updates on politics, world, sports, entertainment and lifestyle, log on to our website latestly.com).