Based on the findings, researchers estimated the prevalence of infection varied from 13.5 to 70 per cent across the nine sites, with the highest prevalence observed in four sites that were surrounded by more densely populated neighbourhoods. 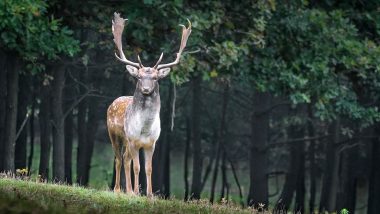 New York, December 24: US scientists have detected infection by at least three variants of Covid-19 in white-tailed deer across six locations in Ohio state, which likely transmitted from humans. Researchers from the Ohio State University took nasal swabs from 360 white-tailed deer in nine northeast Ohio locations between January and March 2021.

The study published in the journal Nature suggests that wild deer could be SARS-CoV-2 virus reservoir. The fact that wild deer can become infected "leads toward the idea that we might actually have established a new maintenance host outside humans," said Andrew Bowman, Associate Professor of veterinary preventive medicine at the Ohio State University. COVID-19 3rd Wave, Which May Be Triggered by Omicron Variant, Likely to Peak in February 2022, Say Researchers at IIT-Kanpur.

"Here, we're saying that in the wild, they are infected. And if they can maintain it, we have a new potential source of SARS-CoV-2 transmitting into humans. That would mean that beyond tracking what's in people, we'll need to know what's in the deer, too. It could complicate future mitigation and control plans for Covid-19," Bowman added.

The analysis also showed that B.1.2 viruses dominant in Ohio in the early months of 2021 spilled over multiple times into deer population in different locations.

"The working theory based on our sequences is that humans are giving it to deer, and apparently we gave it to them several times," he said. "We have evidence of six different viral introductions into those deer populations. It's not that a single population got it once and it spread."

In the study, each site was sampled between one and three times, adding up to a total of 18 sample collection dates. Based on the findings, researchers estimated the prevalence of infection varied from 13.5 to 70 per cent across the nine sites, with the highest prevalence observed in four sites that were surrounded by more densely populated neighborhoods.

According to Bowman, white-tailed deer functioning as a viral reservoir of SARS-CoV-2 would likely result in one of the two outcomes: the virus could mutate in deer, potentially facilitating transmission of new strains to other species, including humans, or the virus could survive in deer unmutated while it simultaneously continues to evolve in humans. Paxlovid Pill: Pfizer's Antiviral Pill To Treat COVID-19 Will Take About 6 to 8 Months To Come to US Markets.

At some point when humans don't have immunity to the strains infecting deer, those variants could come spilling back to humans, he said. While it is likely the virus was passed from infected humans in nearby neighbourhoods, the team speculated the deer were infected by drinking contaminated water, as research has already shown the infection lingers in human faeces and wastewater.

(The above story first appeared on LatestLY on Dec 24, 2021 02:31 PM IST. For more news and updates on politics, world, sports, entertainment and lifestyle, log on to our website latestly.com).