A team led by the University of Pennsylvania developed the drug diABZI, which activated the body's innate immune response and effectively prevented severe COVID-19 symptoms, including those from the South African variant (B1351) and also curbed their spread in mice, the scientists said. 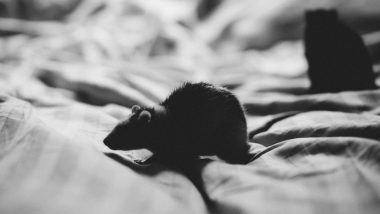 New York, May 30: US researchers have developed a novel drug that could not only prevent SARS-CoV-2, the virus causing COVID-19, and its variants, but also treat other respiratory coronaviruses in mice.

A team led by the University of Pennsylvania developed the drug diABZI, which activated the body's innate immune response and effectively prevented severe COVID-19 symptoms, including those from the South African variant (B1351) and also curbed their spread in mice, the scientists said. The mice treated with diABZI showed much less weight loss than the control mice, had significantly reduced viral loads in their lungs and nostrils, and increased cytokine production. Cool PPE Suit with Ventilation System for COVID-19 Warriors, Thanks to Student Innovator From Mumbai.

'Few drugs have been identified as game-changers in blocking SARS-CoV-2 infection. Activating an early immune response therapeutically with a single dose is a promising strategy for controlling the virus, including the South African variant B1351, which has led to worldwide concern,' said Sara Cherry, Professor of Pathology and Laboratory Medicine at the varsity's Perelman School of Medicine. Pfizer's Coronavirus Vaccine Less Effective But Still Gives Protection Against B.1.617 Variant, Reveals Study.

'The development of effective antivirals is urgently needed for controlling SARS-CoV-2 infection and disease, especially as dangerous variants of the virus continue to emerge,' she added. The findings are published in the journal Science Immunology. Canine Coronavirus: Dog Coronavirus Found in Humans in Malaysia, Why You Shouldn't Worry.

By observing human lung cell lines that had been infected with SARS-CoV-2, the team found that the virus is able to hide, delaying the immune system's early recognition and response. They performed high throughput screening of 75 drugs that target sensing pathways in lung cells and examined their effects on viral infection under microscopy.

They identified nine candidates, including two cyclic dinucleotides (CDNs), that significantly suppressed infection by activating STING (the simulation of interferon genes). Since CDNs have low potency and make poor drugs, according to Cherry, her team decided to also test a newly-developed small-molecule STING agonist called diABZI, currently being tested in clinical trials to treat some cancers.

Tests on mice, infected with COVID-19 showed that diABZI potently inhibits SARS-CoV-2 infection of diverse strains, including a variant of concern B1351, by activating STING. In addition, diABZI could also inhibit human parainfluenza virus and rhinovirus replication in cultured cells. Thus, the STING agonist may be more broadly effective against other respiratory viruses, the researchers said.

(The above story first appeared on LatestLY on May 30, 2021 12:44 PM IST. For more news and updates on politics, world, sports, entertainment and lifestyle, log on to our website latestly.com).