Germany's Deutsche Bank (DB) on Thursday announced plans to reduce its number of full-time staff members from over 97,000 to "well below 90,000" to overhaul parts of its investment banking business and bring down costs. 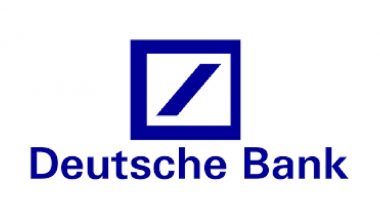 Washington, May 24: Germany's Deutsche Bank (DB) on Thursday announced plans to reduce its number of full-time staff members from over 97,000 to "well below 90,000" to overhaul parts of its investment banking business and bring down costs.

In its equities sales and trading business, the bank said it was aiming to reduce headcount by about 25 per cent. The bank did not say which countries would be affected by the job cuts, the BBC reported.

"We remain committed to our Corporate and Investment Bank and our international presence -- we are unwavering in that. However, we must concentrate on what we truly do well," CEO Christian Sewing said.

It is the latest effort by the German lender to turn around its business after years of losses. In April, it ousted CEO John Cryan, replacing him with Sewing, who has spent his entire career at the bank.

Sewing announced soon after taking over that job cuts were coming. He said in April that Deutsche Bank's investment banking business would focus on serving its core European client base and reduce its commitment to the US and Asia.

He also announced a review of its global equities business. The moves would bring "painful" cutbacks, he warned.

The company was now giving more details on the plans, which include cutting jobs at its equities sales and trading business by about a quarter.

Deutsche Bank said it expects its 2018 results to be hit by restructuring charges of up to 800 million euros ($935.9 million). For 2019, the bank plans to cut adjusted costs to 22 billion euros.

(The above story first appeared on LatestLY on May 24, 2018 05:27 PM IST. For more news and updates on politics, world, sports, entertainment and lifestyle, log on to our website latestly.com).