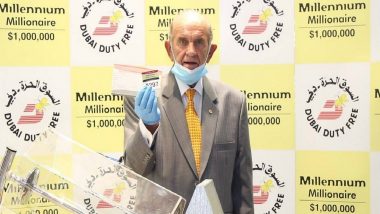 Dubai, July 16: The principal of the Indian High School in Ajman has won a million dollars in the Dubai Duty Free (DDF) raffle draw, it was reported.

Speaking to Gulf News, Das said she was grateful for the win.

"In current times, this is a great blessing. Rest assured, the money will be put to good use."

Das said she was waiting to head home to India where she would like to help some of her relatives in need of money.

She also said she would like to set aside some money for the school in Ajman where she is currently the principal.

According to the organisers of DDF, Das is the 165th Indian national to win million dollars since the promotions began in 1999.

(The above story first appeared on LatestLY on Jul 16, 2020 01:52 PM IST. For more news and updates on politics, world, sports, entertainment and lifestyle, log on to our website latestly.com).