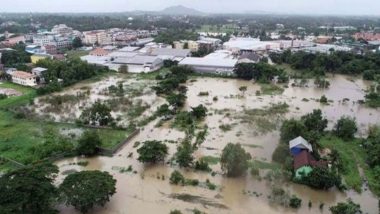 Bangkok, Sep 21: Twenty-two provinces in Thailand have been severely affected by flash floods after tropical storm Noul made landfall in the country, said a senior government official.

The flash floods and excessive rainwater, caused by the tropical storm covering all regions of the country, have damaged infrastructures, farms, villages and other property in 22 provinces over the last few days, Xinhua news agency quoted Department of Disaster Prevention and Mitigation (DDPM) Director General Chayaphol Thitisak as saying on Sunday. Tropical Storm Noul Makes Landfall in Thailand, TMD Issues Warning to 24 Provinces to Brace for Flooding.

Some 1,400 households in 224 villages in those provinces have been damaged due to the tropical storm, which has caused the flash floods and flowing rainwater as well as high tides in the Gulf of Thailand and Andaman Sea, according to Thitisak.

Noul is as devastating as tropical storm Podul, which caused widespread flooding in the Nakhon Phanom province last August, according to the Thai Meteorological Department (TMD).

Noul is currently increasing in strength as it approaches Vietnam and is likely to develop into a typhoon, said the TMD, adding that it was closely monitoring whether it weakens into a tropical storm as it sweeps through upper Thailand.

The northeast, the TMD said, is forecast to be showered with more than 90 mm of rainfall and may cause flooding in the region.

Noul, currently a Category 3 storm, is likely to turn into Category 5 or a typhoon.

(The above story first appeared on LatestLY on Sep 21, 2020 10:35 AM IST. For more news and updates on politics, world, sports, entertainment and lifestyle, log on to our website latestly.com).