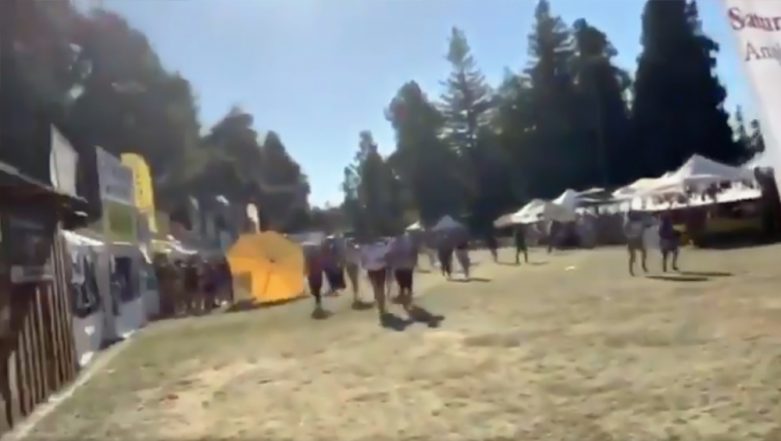 California, July 29: According to the latest update in the Gilroy Garlic festival shooting incident, the gunman has been shot and killed, as per an AFP report. Three people are reportedly killed in the incident. President Donald Trump had earlier tweeted saying: "Law Enforcement is at the scene of shootings in Gilroy, California. Reports are that shooter has not yet been apprehended. Be careful and safe!"

Videos posted on social media show the festival attendees running in confusion and one loud popping sound could be heard in the background. The annual festival was wrapping up its third and final day. US Shooting Rampage: Disgruntled Engineer DeWayne Craddock Kills 12 in Virginia Beach.

Law Enforcement is at the scene of shootings in Gilroy, California. Reports are that shooter has not yet been apprehended. Be careful and safe!

According to a BNO news report, an eye witness reported that the shooter – a male in his 20s – opened fire into one of the booths at the festival before fleeing the scene. More details about the shooting incident are awaited.

yo somebody was shooting at the gilroy garlic festival. be safe pic.twitter.com/B39ZIYe8wr

According to a person who shared the above video of the incident on social media, the festival didn't have any emergency evacuation gate and attendees were stranded in the heat for 30 minutes.

The Gilroy Garlic Festival was founded in 1979 and features food, drink, live entertainment and cooking competitions. It is reportedly hosted by volunteers and describes itself as the world’s greatest summer food festival.