Hagia Sophia, a 1,500-year-old UNESCO World Heritage site in Istanbul, can be converted into a mosque, the Turkish Council of State ruled. 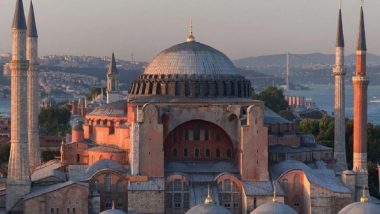 Istambul, Jul 10: Hagia Sophia, a 1,500-year-old UNESCO World Heritage site in Istanbul, can be re-converted into a mosque, the Turkish Council of State ruled on Friday. Turkey's highest administrative court overturned a 1934 cabinet decision that changed Hagia Sophia, a former cathedral-turned-mosque, into a museum. The court approved the Turkish government's move to re-convert the historic monument into a mosque.

The Hagia Sophia, a domed building that sits in Istanbul's Fatih district on the west bank of the Bosporus, was originally a cathedral before becoming a mosque and then a museum in the 1930s. Turkish President Recep Tayyip Erdogan had called for the change during an election rally last year. Islamists in Turkey have long called for it to be converted, but secular opposition members have opposed the move, BBC reported.

The Hagia Sophia is a domed building that sits in Istanbul's Fatih district, on the west bank of the Bosporus. Justinian I ordered the massive construction built in 532, when the city - then known as Constantinople - was the capital of the Byzantine Empire, also known as the Eastern Roman Empire. Engineers brought materials from across the Mediterranean to build the colossal cathedral. Because of its 1,500-year history, the Hagia Sophia holds immense religious, spiritual and political significance for groups inside and outside Turkey. (With IANS inputs)

(The above story first appeared on LatestLY on Jul 10, 2020 09:07 PM IST. For more news and updates on politics, world, sports, entertainment and lifestyle, log on to our website latestly.com).