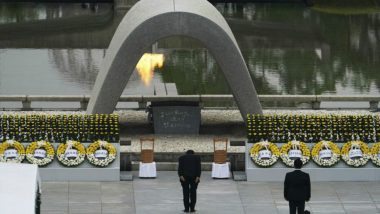 75th Anniversary of Hiroshima Atomic Bombing (Photo Credits: Twitter)
"I know not with what weapons World War III will be fought, but World War IV will be fought with sticks and stones." – Albert Einstein.
20th century has witnessed the progress of mankind at a rapid pace like no other. From Telegram to E-mail, from rails to planes, humans even reached the Moon in this century. But this century also witnessed bloodiest wars and devastation to mankind ever. And none can be more horrific than the Hiroshima atomic bombing that took place on August 6, 1945 in Japan. Hiroshima Day 2020: Facts About The Atomic Bombing in Hiroshima and Nagasaki That Unleashed a Catastrophe in Japan.
The 9000-pound uranium-235 bomb named ‘Little Boy’ immediately killed nearly 80,000 people on explosion while tens of thousands of people later died of radiation exposure. 90% of the city was wiped out leaving standing some steel and concrete buildings and bridges.
Every year the city of Hiroshima holds a peace memorial ceremony at Hiroshima Peace Memorial Park. The participants of the ceremony include families of the deceased and people from all over the world. Bombing at Hiroshima with another one at Nagasaki three days later marked the end of the Second World War but the question is, at what cost?

How Do We Reach Here?

After the end of World War -1 nobody thought such great conflict would arise again. English author H.G. Wells also termed it as ‘The War to end all wars’. But, he was proven wrong not long after when Nazi Germany under dictatorship of Adolf Hitler forced the whole of Europe in Second World War.
The Second World War was initially being fought between the ‘Axis forces’ comprised of Nazi Germany led by Hitler, Fascist Italy led by Benito Mussolini & Kingdom of Japan under Hirohito on one side while the other side named as ‘Allied forces’  comprised of The Soviet Union under leadership of Joseph Stalin, The United Kingdom of Great Britain led by PM Sir Winston Churchill, France and Republic of China.
Initally the United States of America was not involved in the war. It was just recovering from the great depression of 1930 and experience of World War - I was also making the general public rallying against getting involved in a war that was being fought of foreign lands.
In 1940, French forces surrendered to Nazi Germany, Italy opened a new front against British in Mediterranean and Japan also threatened to gain lands in Indochina region. In response to this and to save its surviving ally in British, America put sanctions on Japan with cutting off supplies of various essential commodities. Also, USA moved its Pacific Fleet from San Diego to Hawaii.
Sensing the pressure of the US and to prevent American naval interference, Japan decided to carry out a devastating preventive strike. As per the scheme, a Japanese task force consisting of six aircraft carriers attacked Pearl Harbour near Hawaii on December 7, 1941 killing more than 2,400 Americans and at least 1000 were injured. 20 American naval vessels were either damaged or destroyed including 8 battleships as well as more than 300 aircrafts. This attack forced America to get involved in War with Allied forces and declare war against the Kingdom of Japan.
America while fighting the war was losing several soldiers every day. Japanese soldiers were treating the captured American soldiers very badly. US President Harry Truman wanted to save lives. On the other hand, he wanted to avoid the invasion of Japan via land while at the same time making Japan surrender. Thus, America at last decided to use Atomic bomb against Japan becoming the first and only country to use Atomic bomb during wartime so far.

It was the first time that Atomic weapon was used in History. With huge human loss Japan also suffered major industrial setbacks. For a long time after the bombing, people continued to die of radiation sickness, burns and other wounds. After 3 days of Hiroshima, America dropped a more powerful ‘Fat Man’ bomb on the city of Nagasaki. It killed around 40,000 people. The Empire of Japan surrendered on August 15, 2020 citing devastating power of a new and most cruel bomb.
Number of survivors of the atomic bombings suffered effects of radiation exposure. Cancer probability was increased in such persons and sometimes in their children.

The bombings were a horrific thing to happen. Japan created a park at the location of impact which created an open field. The Park is known as Hiroshima Peace Memorial Park. The park is in the memory of all those killed in the atomic bombing. There is a dome shaped building near the park known as ‘Bomb dome’. This building was closest to the hypocentre of the explosion.  In 2016, Barack Obama became the first American president to visit the bombing site in history.
The county of Japan has not forgotten the bombings but has not let it become a burden on them. Today, Japan is considered one of the most developed nations in the world. It is highly technologically advanced nation. Japan created one of the earliest superfast trains in the world which are known as ‘Bullet Trains’ or ‘Shinkansen’. The Japanese train network is known worldwide for its punctual operation.
Since then great progress is made towards world peace. The United Nations was constituted post World War – II. World has successfully seen off a Cold War between two superpowers. Efforts are being made to make this earth ‘Nuclear weapon free’. Non-proliferation treaties are being signed. Globalisation has improved social, cultural exchange between nations and improved mutual trust.
After witnessing wars for many years, Japan's medical system, disaster management system has evolved as one of the best in the world. This nation has been pulled back for decades in every way however they have proved with tough determination anything is possible. With economic wars it is now combating pandemic. Japan's approach has always been divergent and more functional.  The land of the rising sun, is pushing their limits in every aspect and surging in a unique way and inspiring the whole world to come out of this pandemic even stronger.
(This article has been sourced from Prasar Bharati News Services as part of Coronavirus coverage)

(The above story first appeared on LatestLY on Aug 06, 2020 11:41 AM IST. For more news and updates on politics, world, sports, entertainment and lifestyle, log on to our website latestly.com).