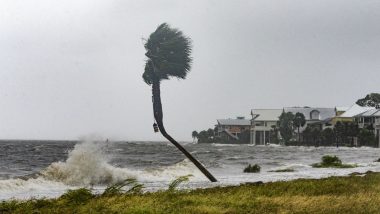 Montgomery, September 16: The dreaded Hurricane Sally made landfall in southern United States in the wee hours of Wednesday. Stated as a "category 2 storm", it struck the Gulf Shores, Alabama and was accompanied with incessent rainfall. As the hurricane made a landfall, power outages were reported in over 240,000 households in the region. Hurricane Sally: Heavy Rain, Pounding Surf and Flash Floods Hit Parts of Florida Panhandle and Alabama Coast.

A total of 17 million people living in the states on the US Gulf coast are feared to be in the "path of storm". Several thousands of residents were evacuated to shelter homes based in high-altitude regions.

The hurricane is expected to cause deluge in coastal countrysides and urban townships, with upto 11 feet of water-logging fearing some regions. The Governors of Louisiana, Mississippi, Florida and Alabama have declared states of "emergency".

The National Hurricane Centre has warned of fatal consequences if the guidelines issued by the government are not strictly adhered to. It has warned Americans based in the region against venturing out of their homes or shelter centres.

"Life-threatening storm surge is occurring along portions of the coastline from Alabama to the western Florida Panhandle, including Pensacola Bay and southern portions of Mobile Bay," the weather body said.

(The above story first appeared on LatestLY on Sep 16, 2020 04:47 PM IST. For more news and updates on politics, world, sports, entertainment and lifestyle, log on to our website latestly.com).