Security arrangements have been tightened with almost 10,000 policemen patrolling the streets of Jerusalem and even the Iron Dome anti-missile system placed on alert to tackle any attempt to fire rockets on Israel. 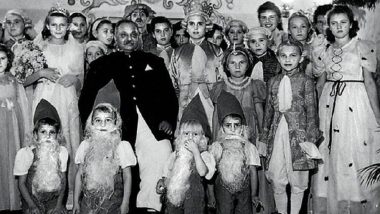 Jerusalem, January 23: India on Thursday expressed solidarity with Israel as the world leaders from 47 countries descended in Jerusalem to attend the World Holocaust Forum and commemorate the 75th anniversary of the liberation of Auschwitz camp. "India expresses solidarity with Israel on 75th Anniv of liberation of #Auschwitz. We also pay homage to Maharaja Jam Sahib of Nawanagar, who saved the lives of scores of Polish Jewish Children during World War II (sic)," the Indian embassy in Israel tweeted.

The spokesperson of the Israeli embassy in New Delhi, Avigail Spira, promptly responded to the tweet by pointing out that there was no anti-semitism in India. "India is not only a place where Jews never faced anti-semitism or persecution, it is also a country that provided a safe haven to Jews escaping the Holocaust," Spira said. Austria: Holocaust Survivors’ Portraits Vandalized in Vienna.

During the World War II, around 1,000 Polish children are said to have come to Nava Nagar (now Jamnagar), which was then ruled by Maharaja Jam Saheb Digvijaysinhji Jadeja. The king is said to have not only arranged shelter for them at the Sainik School, Balachadi, for four years but also created a camp for the children to ensure that they grew up around Polish culture, traditions and education.

India has been home to Jews for hundreds of years with only a few thousand now left in the country. It has four different communities - Bene Israel from the Mumbai region, the Cochini Jews, Baghdadis in the Kolkata region and the Bnei Menashe in Manipur and Mizoram. Majority of the Indian Jews immigrated to Israel but some also left for other countries.

Jewish scholars have often pointed out that India was probably the only country where there was no trace of anti-semitism. It is something that the Indian Jews living in Israel also often point out. Prominent leaders participating in Thursday's event include, Russian President Vladimir Putin, US Vice President Mike Pence, US House Speaker Nancy Pelosi, Prince Charles, French President Emmanuel Macron, German President Frank-Walter Steinmeier and Ukrainian President Volodymyr Zelensky.

Security arrangements have been tightened with almost 10,000 policemen patrolling the streets of Jerusalem and even the Iron Dome anti-missile system placed on alert to tackle any attempt to fire rockets on Israel.