A civil war-like situation was witnessed in Karachi after Sindh police chief was allegedly abducted by Pakistani army, reports said on Wednesday. 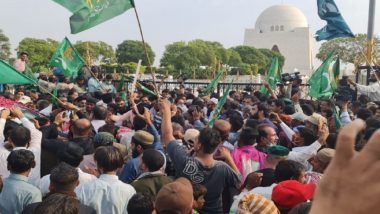 The police had arrested Safdar Awan on October 19, from the hotel they were staying in Karachi, hours after Maryam Nawaz had slammed Pakistan Prime Minister Imran Khan at second power show of 11-party opposition alliance People's Democratic Movement (PDM), which was attended by thousands of people. His arrest came a day after Safdar raised anti-government slogans at Muhammad Ali Jinnah mausoleum.

An FIR was registered against Maryam Nawaz, Safdar and 200 others for violating the sanctity of the mausoleum. Safdar, a retired captain, was later released on bail. Media reports said the Sindh police chief was forced to arrest Safdar Awan. Karachi Rally: Maryam Nawaz Vows to Bring Nawaz Sharif Back to Power, Send Imran Khan to Jail.

According to unconfirmed reports by The International Herald, Sindh police and Pakistan army exchanged fire in Karachi, leading to a civil war-like situation. It was also reported that 10 police officers were killed in the clashes. However, Pakistan’s leading newspapers Dawn carried no such reports. Meanwhile, Pakistan's Chief of Army Staff (COAS) General Qamar Javed Bajwa has ordered a probe.

"Taking notice of the Karachi incident, the COAS has directed the Karachi Corps Commander to immediately inquire into the circumstances to determine the facts and report back as soon as possible," The Express Tribune quoted an Inter-Services Public Relations (ISPR) statement as saying on Tuesday. "We expect that justice will be done to Sindh Police in the coming days so that morale and administrative autonomy of police may be reinforced for all times to come," Sindh police said in a tweet.

(The above story first appeared on LatestLY on Oct 21, 2020 11:26 AM IST. For more news and updates on politics, world, sports, entertainment and lifestyle, log on to our website latestly.com).