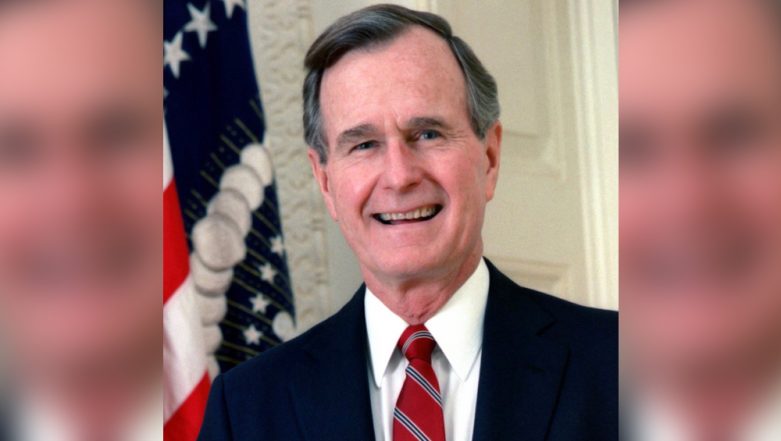 Washington, December 19: Former US President George H.W. Bush, who passed away in November, has sponsored a seven-year-old boy in the Philippines for 10 years under a pseudonym, a non-profit who connected them has revealed. Through Compassion International that uses churches to help children in poor communities around the world, Bush sponsored Timothy for a decade, the CNN reported. The 41st US President, who passed away at the age of 94 years on November 30, sent funds that went toward Timothy's education, extracurricular activities and some of his meals. The organisation has shared some of Bush's letters with CNN.

The Bush family was not available to comment on the letters, but Jim McGrath, a spokesperson for the Office of George H.W. Bush, confirmed the letters' authenticity. Once the sponsorship began, Bush began writing to the boy right away. He said in his first letter, send on January 24, 2002, that he loved Timothy from the get-go. George H W Bush Passes Away, Twitterati Expresses Condolences for Former US President.

"Dear Timothy, I want to be your new pen pal. I am an old man, 77 years old, but I love kids; and though we have not met I love you already. I live in Texas - I will write you from time to time - Good Luck. G. Walker", a letter that perhaps was the first, read. Despite concerns over his security breach, Bush continued his philanthropic mission and his letters to the child were some of the most endearing ones, Wess Stafford, the former president of Compassion International told CNN. George H W Bush's Funeral Attended by All 5 Living US Presidents From Donald Trump to Jimmy Carter (See Pics).

Timothy never caught on to the hints in Bush's letters, and did not find out who his sponsor was until he had graduated from the program. "After a while, my executive assistant, Angie Lathrop, took over the sponsorship, and after Timothy graduated at 17, she flew to the Philippines to meet him," Stafford said. "That's when she told him who his sponsor really was."

Timothy was stunned, Stafford said. He really could not believe the man he had been writing letters to was once the President of the US. Stafford said that Timothy told Lathrop he had no idea, and that the revelation was life-changing. That was the last time the non-profit heard from Timothy, despite efforts to locate him, Stafford said.

Compassion International works through partnerships with over 7,000 churches in 25 countries around the world.