A video footage showing a "flash mob" of looters ransacking a 7-Eleven store in Los Angeles went viral prompting the city police to ask the public's help to identify those involved in the incidents. 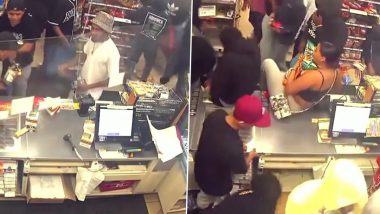 Los Angeles, Aug 20: A video footage showing a "flash mob" of looters ransacking a 7-Eleven store in Los Angeles went viral prompting the city police to ask the public's help to identify those involved in the incidents.

The footage released by police showed the chaos inside the store early this week, where a large crowd, dozens of people, rushed in a 7-Eleven and started grabbing merchandise off the shelves, including drinks, snacks, cigarettes and lotto tickets, reports Xinhua news agency.

Several people can be seen going over the counter and grabbing items there as well.

A store clerk working alone just stood by and police said he just feared for his life.

Cash registers were also destroyed but it is unclear if any money was taken.

Almost all of the US news outlets reported the news and the video shot by surveillance camera in the store on Friday.

WATCH: Police in Los Angeles have released footage showing a crowd ransacking a 7-Eleven and have asked for the public’s help identifying people involved.

The LAPD said they believed the “‘flash mob of looters” formed after a so-called street takeover. pic.twitter.com/vChMBOfP7Y

The LAPD said in a statement on Friday that the incident occurred on Monday after a street takeover.

A group of motorists blocked traffic with their vehicles from all directions to create a "pit" in the middle of the intersection.

"The spectators then formed a 'flash mob' of looters," the LAPD said, adding the term "flash mob" was first used to describe a large public gathering at which people perform an unusual or seemingly random act and then disperse, typically organised by means of the internet or social media.

"In the latest cases, 'flash mobs' have turned from fun spontaneous events to opportunistic criminal occurrences," it noted.

(The above story first appeared on LatestLY on Aug 20, 2022 12:45 PM IST. For more news and updates on politics, world, sports, entertainment and lifestyle, log on to our website latestly.com).