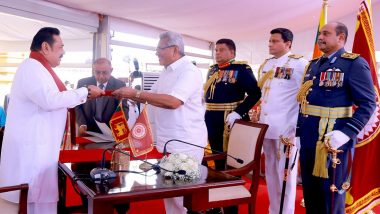 Colombo, August 9: Mahinda Rajapaksa was sworn in on Sunday as Sri Lanka's new prime minister at a centuries-old Buddhist temple after his party won a landslide victory in parliamentary elections that allowed the influential family to consolidate power for the next five years.

I am humbled by the opportunity given to me to serve my people again. The trust #SriLankans afford me, inspires me to continue serving my nation. President @GotabayaR, the new @PodujanaParty govt. & I will ensure that #lka embarks on a progressive journey during our tenure. pic.twitter.com/We5KWAkGfL

"I am humbled by the opportunity given to me to serve my people again," he tweeted soon after starting his fourth innings as prime minister. Mahinda Rajapaksa said the trust bestowed on him by the people will inspire him to continue to serve the country. The prime minister vowed that he would ensure that Sri Lanka would embark on a progressive journey during his tenure.

Supporters of the SLPP lit firecrackers to celebrate his swearing-in as the 13th Prime Minister at the Rajamaha Viharaya in Kelaniya, a north Colombo suburb, at the auspicious hour of 9:28 am local time.

The Rajamaha Viharaya, also known as the Kelaniya temple, dates back to 2,500 years. According to the website of the temple, it has often been associated with the rise and fall of Sri Lanka.

The SLPP, led by Mahinda and Gotabaya Rajapaksa, registered a landslide victory in the August 5 general election, securing two-thirds majority in Parliament needed to amend the Constitution to further consolidate the powerful Rajapaksa family's grip on power.

India's High Commissioner to Sri Lanka Gopal Baglay on Saturday became the first envoy to congratulate the new prime minister when he called on Mahinda Rajapaksa. Baglay recalled that Prime Minister Narendra Modi had complimented the people and Government of Sri Lanka on the successful conduct of elections and had acknowledged the impressive electoral performance of the SLPP.

He reiterated the strong desire and the commitment of the Indian government to work very closely with the new government and Parliament in Sri Lanka for further strengthening comprehensive bilateral cooperation, the Indian High Commission here said.

The strong mandate received by Prime Minister Mahinda Rajapaksa provides a fresh opportunity for the two countries to enhance bilateral engagement, including mitigating the adverse economic effects of the COVID-19 pandemic, Baglay said.

In Wednesday's parliamentary polls, he received over 527,000 individual preference votes -- the highest ever recorded by a candidate in the country's election history. The SLPP won in 145 constituencies, bagging a total of 150 seats with its allies, a two-thirds majority in the 225-member Parliament.

The cabinet ministers, state and deputy ministers are expected to be sworn-in this week. The Rajapaksa family -- including SLPP founder and its National Organiser 69-year-old Basil Rajapaksa, who is the younger brother of Gotabaya Rajapaksa, 71, and Mahinda Rajapaksa -- has dominated Sri Lankan politics for two decades.

Mahinda's son Namal Rajapaksa, 34, is also a lawmaker from Hambantota, the family bastion. President Gotabaya Rajapaksa had won the November presidential election on the SLPP ticket. He dissolved Parliament in March and called for early snap elections.

In the parliamentary election, he was seeking 150 seats needed to execute constitutional changes, including to repeal the 19th Amendment introduced in 2015 that curtailed the powers of the President and strengthened the role of Parliament. Activists, already alarmed by the diminishing space for dissent and criticism in the island nation, fear such a move could lead to authoritarianism.

The United National Party (UNP) of former prime minister Ranil Wickremesinghe suffered a humiliating defeat during the election. It just won a single seat that too since the party secured more than 2.5 per cent of the votes cast under a proportional representation system of voting. UNP leader and four-time prime minister Wikremesinghe was unseated for the first time since he entered Parliament in 1977.

Mahinda Rajapaksa earlier served as the country's executive president from 2005-2015, a period which was mired by allegations of human rights abuses, especially against the minority Tamils. He enjoys cult status among the 77 per cent Sinhala majority community for his action to end the brutal nearly three-decade-long civil war in the island nation with the defeat of the Liberation Tigers of Tamil Eelam (LTTE) in 2009.

The LTTE led by its leader Velupillai Prabhakaran had waged a violent campaign to carve out a separate Tamil homeland in the north and east of the island nation.

Once the new government is up and running, it will face the real challenges, especially on the economic front. Following the COVID-19 crisis, exports have slumped. Thousands of Sri Lankan expatriate workers, who have lost their jobs, have returned home. The tourism industry, a major forex earner, faces a tough time ahead due to the pandemic.