Malala Day 2020: On 23rd Birthday of Malala Yousafzai, Know Facts About The Education Activist and Her Story 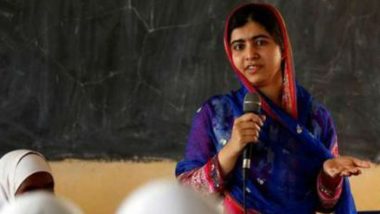 New Delhi, July 12: Malala Yousafzai, one of the most prominent education activists, was born on this day in the year 1997. The date is annually observed as Malala Day, to commemorate her struggle against Taliban and inspire scores of other girls across the world. On her 23rd birthday, here are facts to know about Malala and a brief story of her life so far.

Malala was born in Mingora town, located in the restive Khyber Pakhtunkhwa province of Pakistan. Her father, Ziauddin Yousafzai, was committed to provide her equal opportunity as boys and enroll her for formal education. Malala Yousafzai Completes Her Degree at the University of Oxford on Philosophy, Politics and Economics.

Malala studied in the school run for girls by her father in Mingora. While her education progressed normally till 2008, it was the takeover of region by the Taliban that year which threw her education into disarray. The Taliban banned girls from going to schools.

In 2009, she wrote a blog with an anonymous identity, highlighting the hardship faced by girls in Pakistan's northwest frontier region - if they aspire for education. The blog was published by BBC and drew the world's attention towards the takeover of Swat district by Taliban.

After Malala was identified as the blogger, she gained prominence nationally and internationally. She appeared regularly in print and electronic media, giving interviews for the cause of girls' education.

Malala's activism turned her into a prime target for Taliban. On October 9, 2012, a gunman barged into the bus of school children in Swat district and fired on Malala. The bullet had hit the left side of her head.

After being initially admitted at the Rawalpindi Institute of Cardiology, she was airlifted to the UK for treatment at Queen Elizabeth Hospital in Birmingham. She finally regained consciousness after 10 days.

The family of Malala was also called to the UK, and are now settled in the nation. They formed the Malala Fund in 2013, to draw donations that are being transparently used to facilitate education of girls in third-world countries.

Malala also visited some of the countries where poverty, militancy and political instability has denied education rights to girls. Her mission is to ensure 12 years of free and quality education for girls across the world.

Taking cognisance of her efforts, the United Nations conferred upon her the Nobel Peace Prize in 2014. Back in Pakistan, she is hailed as a pioneer among education activists. Former Prime Minister Shahid Khaqan Abbasi called her one of "the most prominent citizen" of the country.

According to Malala - who recently completed her graduation in philosophy, politics and economics from the University of Oxford - the mission taken upon by her is far from over.

"With more than 130 million girls out of school today, there is more work to be done. I hope you will join my fight for education and equality. Together, we can create a world where all girls can learn and lead," she had said.

(The above story first appeared on LatestLY on Jul 12, 2020 06:59 AM IST. For more news and updates on politics, world, sports, entertainment and lifestyle, log on to our website latestly.com).