India on Tuesday strongly condemned the terrorist attack on a hospital in Afghanistan’s capital Kabul. The attack on Dasht-e-Barchi hospital in Kabul 16 people were killed while at least 45 sustained injuries. More than 80 patients were also evacuated from the hospital after the gunmen barged into the hospital and opened firing. 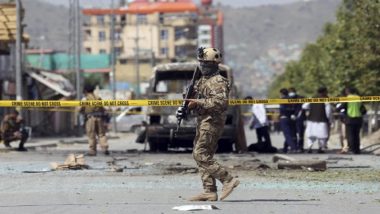 New Delhi, May 12: India on Tuesday strongly condemned terrorist attacks which took place in Afghanistan on Tuesday. In one of the attacks on a hospital in Afghanistan’s capital Kabul, 16 people including two newborns were killed. According to reports, three gunmen opned giring inside Dasht-e-Barchi hospital in Kabul. At least 45 people sustained injuries. More than 80 patients were also evacuated from the hospital. Taliban Peace Deal Explained: US Out in 14 Months, Intra-Afghan Talks and Challenges.

The Ministry of External Affairs in a statement said, “India strongly condemns the barbaric terrorist attacks against innocent civilians, including women and children, at Dasht-e-Barchi hospital maternity ward, funeral in Nangarhar province and the Army check post in Laghman province of Afghanistan on 11-12 May.” US, Taliban Sign Historic 'Peace Deal' to Bring Normalcy in Afghanistan; Mike Pompeo Says Afghan Soil 'Will Never be Used as Terror Base'.

In another attack, which took place at a funeral in Nangarhar province of the country, around 24 people were killed. Afghanistan President Ashraf Ghani in his address to the nation on Tuesday evening, stressed on the need to switch from an “active defensive” mode to an “offensive” mode in response to this bloodshed. He said that the Taliban had not given up fighting and killing Afghans; instead, they increased their attacks. Till now no group has claimed responsibility for the attack.

(The above story first appeared on LatestLY on May 13, 2020 12:23 AM IST. For more news and updates on politics, world, sports, entertainment and lifestyle, log on to our website latestly.com).