Taliban Peace Deal Explained: US Out in 14 Months, Intra-Afghan Talks and Challenges

Mike Pompeo, while speaking to the media that had convened in Doha to witness the historic peace agreement, said the deal would have no effect if extremist group take advantage of the same. He assured that the United States would resume its military activities in the region if Taliban allows ISIS-Khorasan, al-Qaeda and other 'terrorist groups' to operate from the Afghan soil. 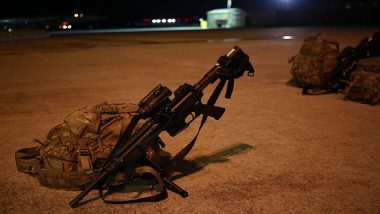 Doha, February 29: After 17 months of negotiation, the United States of America and Afghan insurgent group Taliban inked a peace deal, aimed at restoring normalcy in war-ravaged Afghanistan. The signing of the historic agreement was witnessed by officials from Pakistan, China, Iran and India, apart from top officials of the US and Afghan governments. Here is a brief explainer to this "legitimate" attempt to bring peace in Afghanistan after 18 years of war.

One of the foremost factors of the peace deal was a complete US military retreat from Afghanistan. The Taliban, throughout the backchannel negotiations, said they would abide by any peace agreement as long as Washington commits to accept Kabul's absolute territorial and political sovereignty. In other words, Taliban wanted the US to withdraw all its forces from the Afghan soil and pave way for an "Afghan-controlled" government in the country.

As per the peace deal, the US has agreed to move all of their military personnel from the US within 14 months. The first phase of America's exit would be reflected in the next four-and-a-half month, when the first batch of US soldiers would fly back to their homeland.

While the US is forced to weaken its clutch over Kabul through the agreement, the Taliban is directed to recognise the legitimacy of the Ashraf Ghani government and hold negotiations on the sharing of power. Called as the "intra-Afghan talks", they would begin in the next 15 days and the US would act as a facilitator.

Apart from the Ghani government, the intra-Afghan talks would also be held with other political and insurgent groups, barring the ISIS-Khorasan, Al-Qaeda and other extremist outfits operating in the region. To create a conducive atmosphere for a wholistic intra-Afghan negotiations, US Secretary of State Mike Pompeo called for further reduction of violence.

"Intra-Afghan negotiations will start soon thereafter, and will build on this fundamental step to deliver a comprehensive and permanent ceasefire and the future political roadmap for Afghanistan. The only way to achieve a sustainable peace in Afghanistan is for Afghans to come together and agree on the way forward," he said.

The first major challenge would be the continuance in the reduction of violence. The truce declared by Taliban over the past fortnight, after it became apparent that the much-awaited peace deal would be signed, led to near "80 percent reduction in violence", reports said citing top Afghan officials. However, the authorities are unsure whether the embargo on violence will prevail.

Taliban has been seeking the release of over 5,000 fighters captured by the Afghan government. Several among these apprehended militants, claim analysts, have turned "ultra-radicalised" and may end up joining the ISIS-Khorasan or Al-Qaeda after being released. However, Taliban is expected to proceed with its negotiations with the Ghani government only if the latter agrees to release the captured militants.

The intra-Afghan negotiations are also feared to fall flat as the civilian government in Kabul has increasingly lost credibility. The results of parliamentary elections in Afghanistan were released earlier this months after being kept on "hold" by the election body for months. After it was released, Pakistan and the US did not issue any congratulatory messages to Ghani, signalling the lack of confidence.

Among major regional players, only India had expressed solidarity with the Ghani government. For New Delhi, the peace deal has opened other uncertainties as analysts claim that its investments in Afghanistan may not bear fruit if the incumbent civilian establishment turns inconsequential in the days to come. Further, the withdrawal of US and NATO forces in the months to come may create power vacuums, providing anti-India terror outfits like JeM and LeT fresh spaces to operate.

'Will Never Allow Afghan Soil to be Used as Terror Base'

Pompeo, while speaking to the media that had convened in Doha to witness the historic peace agreement, said the deal would have no effect if extremist group take advantage of the same. He assured that the United States would resume its military activities in the region if Taliban allows ISIS-Khorasan, al-Qaeda and other "terrorist groups" to operate from the Afghan soil.

"Effort (for peace deal) only became real when the Taliban showed interest in pursuing real peace and ending their relationship with Al-Qaeda and other foreign terrorist groups. Agreement that we will sign today is the true test of this effort," Pompeo said, further adding, "We will closely watch Taliban for their compliance with their commitments and calibrate the pace of our withdrawal with their actions. This is how we will ensure that Afghanistan never again serves as a base for international terrorists."

(The above story first appeared on LatestLY on Feb 29, 2020 10:39 PM IST. For more news and updates on politics, world, sports, entertainment and lifestyle, log on to our website latestly.com).