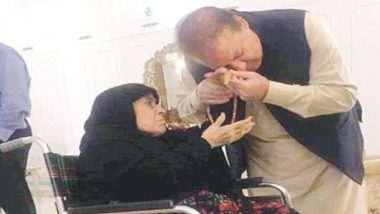 Begum Shamim Akhtar, who was in her 90s, had been unwell for a month, the leaders said on Sunday evening, adding that she visited a hospital in London for check-up twice last week, reports Dawn news.

He said Begum Akhtar's body was likely to be brought back to Lahore within a couple of days and buried next to the grave of her husband Mian Sharif at the family's Jati Umra estate.

Begum Akhtar travelled to the UK in February against the advice of her doctors to see her son, Nawaz Sharif, who has been under treatment for heart and kidney ailments there.

When Mian Sharif died in 2004, the former premier and his brother Shebaz Sharif could not attend the as they were in exile in Jeddah and had rejected a conditional offer by then military dictator Pervez Musharraf.

It was not yet clear if Nawaz Sharif will return to Pakistan for his mother's funeral.