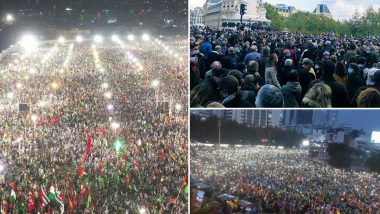 Visuals of the huge Sunday protests, held in three major cities of the world for their own respective causes, suggested that the world has almost returned to the pre-pandemic days. Thousands rallied in Paris, Bangkok and Karachi in defiance of the widely recognised COVID-19 safety norms that mandate the maintenance of social distance. Thailand Protests: Pro-Democracy Demonstrators Carry On Anti-Government Protests in Bangkok Despite Warnings (Watch Video)

The number of demonstrators who turned out at the rallies reflected the fading fear of pandemic amidst the masses. The exhaustion caused by seven months of partial lockdowns and curbs is considered as one of the reasons why a significant section of the world's populace has turned defiant, despite most countries warning of an imminent second wave. France Imposing Night Curfews to Curtail COVID-19 Second Wave.

Why The Protests Erupted

While the demonstrators in Bangkok and Karachi had turned out to mark their angst against the elected governments, the rally in Paris was called to pay tribute to the teacher who was beheaded by an Islamist. Here's why the protests had erupted in each of the cities.

The newly formed Pakistan Democratic Movement (PDM) - an amalgamation of major mainstream opposition parties in the country - organised a massive rally in Karachi. The high turn-out was credited to the sharing of stage by PPP leader Bilawal Bhutto and PML(N)'s Maryam Nawaz, the son and daughter of former prime ministers Benazir Bhutto and Nawaz Sharif, respectively.

The protests mark a key challenge to the Pakistani establishment as the allied parties are not only targeting Prime Minister Imran Khan, but the military leadership which is charged of engineering his victory in the 2018 elections.

In a virtual speech delivered by Nawaz Sharif - who is in self-exile in London - the ex-PM said the Opposition parties are challenging those who want to undermine civilian polity. His remarks were construed as a direct attack on military chief, General Qamar Javed Bajwa.

This is fifth day of pro-Democracy protests. Video shot at 6:05 pm local: pic.twitter.com/edhOtWJufw

The pro-democracy protesters marched on the fifth straight day in parts of Thailand, seeking democratic reforms. The movement was launched by student unions across the nation earlier this year, but went into a lull with the onset of COVID-19 pandemic. The rally on Sunday suggested that the agitation is back in full force, as a wave of protesters were seen in streets of Bangkok.

Outside the Victory Monument, the rally of protesters stretched for over a couple of kilometres. The protests were peaceful, as compared to Friday when several demonstrators were taken into custody after clashes had erupted.

The Thai protesters are seeking reforms in monarchy, resignation of Prime Minister Prayuth Chan-ocha whom they accuse of being backed by the military deep state, and an amendment to the Constitution to introduce more reforms.

Scores of French nationals came out in the streets of Paris on Sunday to mark their angst against the murder of professor Samuel Paty. The onset of COVID-19 second wave did not deter the protesters to assemble and pay tribute to the deceased teacher.

View Pics of The Demonstration at Place de la Republique

There are hindreds if thousands of #FreedomOfExpression protestors demonstrating right now at Place de la Republique in Paris. These are images of the current situation. #protest #paris #SamuelPaty #manif #manifestation pic.twitter.com/MUS0szYpBs

Paty, 47, was killed by 18-year-old Aboulakh Anzorov after the former's pupil informed him that he had showed to them the controversial cartoons of the Islamic Prophet. Anzorov, who is a migrant of Chechnya-origin, was caught on camera beheading Paty. He was later killed in an encounter with the police.

(The above story first appeared on LatestLY on Oct 19, 2020 12:57 AM IST. For more news and updates on politics, world, sports, entertainment and lifestyle, log on to our website latestly.com).