Russia has said that convoys carrying foreign weapons to Ukraine will become "legitimate targets" for the Russian armed forces. Sergei Ryabkov, the country's Deputy Foreign Minister, said Russia has warned the United States of the consequences of arms transfers to Ukraine. 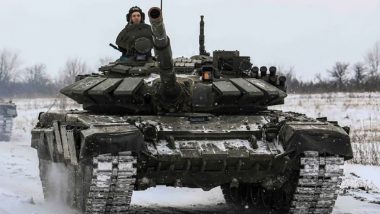 Convoys with foreign weapons recklessly supplied to Ukraine will become legitimate targets for the Russian armed forces, he said. He also added that lists of retaliatory personal sanctions against the US and the West are ready and will be made public soon. Joe Biden Reiterates US Will Not Intervene Military Against Russia in Ukraine.

In addition, Ryabkov said that Russia could resume a security dialogue with the US if Washington is ready for it, Ukrayinska Pravda reported.

At the same time, Ryabkov noted that he "would not say that Russia's proposals on security guarantees remain fully in force, as the situation has changed". Ukraine has claimed that the Russian command has enlisted recruits and "alternatives" -- conscripts who work as community service workers instead of military service -- against Ukraine.

A video made public by the Ukrainian Security Service shows a man saying that his unit, which was abandoned in Ukraine, was formed from "alternative conscripts" who were not supposed to be deployed for military operations or even tours of duty.

According to the captured "alternative", their military task was to divert fire from the Ukrainian armed forces while some more trained personnel carried out military operations.

(The above story first appeared on LatestLY on Mar 13, 2022 08:32 AM IST. For more news and updates on politics, world, sports, entertainment and lifestyle, log on to our website latestly.com).