The officials said they did not know that Ukraine would target the Moskva after helping determine its location. 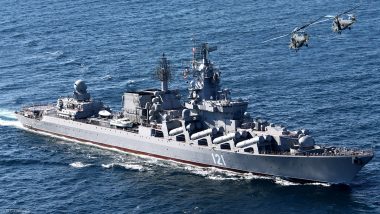 Unnamed officials said Ukraine had asked the US about a ship sailing to the south of Odessa, to which Washington said it was the Moskva and helped confirm its location, the BBC reported.

The officials said they did not know that Ukraine would target the Moskva after helping determine its location.

The 510-crew missile cruiser had led Russia's naval assault on Ukraine, and its sinking in April was a major symbolic and military blow, BBC reported.

At the time, the Russian Defence Ministry said ammunition on board the Moskva exploded in an unexplained fire and the ship tipped over while being towed back to port.

The US is yet to directly address the reports about the Moskva.

However Pentagon spokesman John Kirby denied earlier media reports that the US was providing information about the locations of senior Russian generals on the battlefield, so that Ukrainian forces could kill them.

"We do not provide intelligence on the location of senior military leaders on the battlefield or participate in the targeting decisions of the Ukrainian military," he said.

Kirby said Ukraine combined information that the US and others provided with their own battlefield intelligence.

"We do not provide intelligence with the intent to kill Russian generals," NSC spokesperson Adrienne Watson said.

(The above story first appeared on LatestLY on May 06, 2022 02:32 PM IST. For more news and updates on politics, world, sports, entertainment and lifestyle, log on to our website latestly.com).