Pakistan's latest announcement about Saudi Arabia's investment in an oil refinery at the port city of Gwadar has set alarm bells ringing in the international arena. 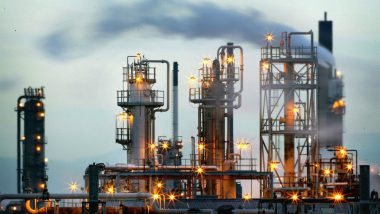 Islamabad, October 9: Pakistan's latest announcement about Saudi Arabia's investment in an oil refinery at the port city of Gwadar has set alarm bells ringing in the international arena. A Zerohedge article claims that Pakistan's move comes from a "desperate" need for funding to ward off a financial crisis stoked by growing debt to China. The column, written by James Dorsey on Mid East Soccer blog, claims that Saudi's oil refinery in Gwadar Port could threaten Iran's India-backed Chabahar Port, making China (and Pakistan) a part of an "all but open war" between Iran and Saudi Arabia. The Saudis may invest up to USD 10 billion dollars in the region. The deal could additionally involve deferred payments on Saudi oil supplies which will firstly, create a strategic oil reserve close to Iran, and secondly, help cash-strapped Pakistan in payments. Turkey wants Saudi Arabia to Prove Jamal Khashoggi Left Consulate Alive.

The Zerohedge article further stated that Pakistan will be forced to seek a USD 12 billion bailout from International Monetary Fund (IMF) if government expenditure is not brought under control -- a fact that Prime Minister Imran Khan-led Pakistan has taken note of. Islamabad's first step to curb the spending spree came in September, as funds for road projects, which are a part of CPEC's Western route that connects Balochistan with China's troubled region of Xinjiang, were not sanctioned in time. The very same road project was already grappling with delays in approval from China, with Pakistan's move bringing progress to a standstill.

Furthermore, Pakistan's Railways Minister Sheikh Rashid cut USD 2 billion dollars from a USD 8.2 billion project that aims to upgrade and expand Pakistan's railway network, a significant part of CPEC. The article quoted Rashid who said, "Pakistan is a poor country that cannot afford huge burden of the loans. CPEC is like the backbone for Pakistan, but our eyes and ears are open." Pak to Set Up Refinery with Saudi's Help in Balochistan.

Islamabad's latest move was inviting the oil-rich Saudi for investments in the Gwadar refinery and mines in Balochistan. The fact that Pakistan officials denied suggestions that the Gulf country would join the CPEC was an indication to China's apprehensions with the deal.

During campaigning for the General Elections in the country, the Pakistan Tehreek-e-Insaf (PTI) had likened the CPEC to "a modern-day equivalent of the British East India Company" which eventually led to colonisation in the South-Asian subcontinent and drained the economies of the countries colonised.

The PTI also denounced Chinese-funded transit projects in Punjab and claimed that funds, which could be used for social spending, were being squandered, while "suggesting" that the projects involved "corrupt practises".

A study published last year by the International Institute for Iranian Studies claims that Iran's Chabahar port posed "a direct threat to the Arab Gulf states" that called for "immediate countermeasures." The study, credited to Mohammed Hassan Husseinbor, further 'warned' that the India-backed port could raise foreign investment in Iran, increase government revenues and "enable Iran to increase its oil market share in India at the expense of Saudi Arabia."

Husseinbor also suggested Saudi support for a low-level Baloch insurgency in Iran's Sistan and Baluchestan province, which would "be a formidable challenge, if not impossible, for the Iranian government to protect such long distances and secure Chabahar in the face of widespread Baluch opposition, particularly if this opposition is supported by Iran's regional adversaries and world powers."

US President Donald Trump's national security advisor John Bolton had drafted a plan last year that "envisioned US support 'for the democratic Iranian opposition' including in Balochistan and Iran's Sistan and Balochistan province." The Saudi-Pakistan deal may potentially bear ominous implications for China, who may well be able to manage Pakistan by addressing their CPEC-related reservations, however, a Saudi-Iranian conflict will be much more complicated to deal with. Saudi Arabia Suspends Ties With Canada Over Activist Arrest Issue, Asks Canadian Ambassador to Leave Within 24 Hours.