A member of Afghanistan's junior women's national volleyball team was allegedly beheaded by the Taliban militants in October this year and her family was threatened not to talk about the incident, claimed a coach in an interview. 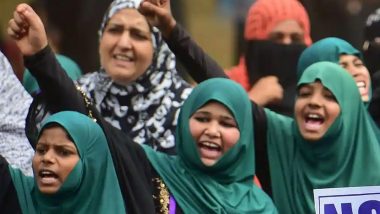 Kabul, October 20: The Taliban militants allegedly killed a member of Afghanistan's junior women's national volleyball team by beheading her earlier this month, said a coach in an interview with the Persian Independent. The militants allegedly threatened family members of the deceased, identified as Mahjabin Hakimi who was a star player of the Kabul Municipality Volleyball Club, not to tell about the incident. An image of what looked like the severed head of the girl bloodied neck turned up on social media platforms a few days ago. However, a recent report revealed that Hakimi was not beheaded by the Taliban and that her death was misreported by media outlets. She died days before Taliban took over Afghanistan. Women's Protests Weaken as Taliban Tighten Grip over Afghanistan.

Earlier, the coach reportedly said in the interview, "All the players of the volleyball team and the rest of the women athletes are in a bad situation and in despair and fear. " He reportedly added that everyone is forced to flee or live underground. The coach reportedly claimed that since its takeover, the Taliban is tracking and hunting down women involved in sports and athletic activities. He reportedly added that only two players of Afghan national volleyball team managed to escape the country. Afghan Woman Volleyball Player Mahjabin Hakimi Beheaded by Taliban? Fresh Reports Say Death Took Place Before Taliban Takeover.

A report published by BBC in September quoted Zahra Fayazi, a Afghan women's volleyball player who stepped into coaching position and had arrived to the UK after fleeing from Afghanistan, as saying, "Our players who were living in the provinces had to leave and live in other places.They even burned their sports equipment to save themselves and their families. They didn't want them to keep anything related to sport. They are scared."

(The above story first appeared on LatestLY on Oct 20, 2021 06:38 PM IST. For more news and updates on politics, world, sports, entertainment and lifestyle, log on to our website latestly.com).