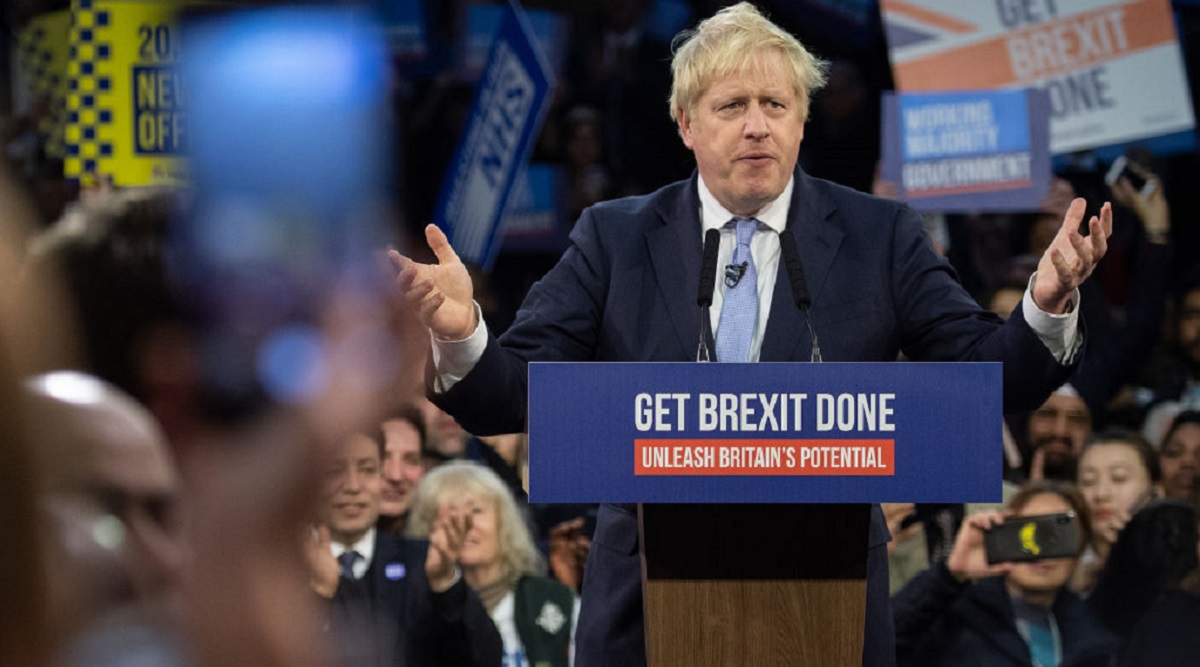 London, December 13: The scale of the Conservatives' projected victory in Britain's election makes Brexit all but inevitable, but could lead to a softer break with the European Union, analysts said on Friday. Prime Minister Boris Johnson looks set to win a comfortable majority in parliament after Thursday's election, which will allow him to ratify his exit deal in time to leave the EU on January 31.

But he still has to negotiate a new economic partnership with the bloc -- Britain's biggest trading partner. Previously, he had to rely on hardline eurosceptic Conservative MPs in the European Research Group, who have been pressing him for a looser trading relationship with Brussels. "With a big majority, Boris Johnson can ignore ERG and go for a softer Brexit if he wishes," noted Charles Grant, director of the Centre for European Reform (CER) think tank. UK General Elections 2019: PM Boris Johnson-led Conservative Party Wins Overall Majority.

Despite Brexit dominating the election, there has been little scrutiny of Johnson's exit deal, which covers separation issues such as expatriate rights and Britain's financial settlement. There has been even less discussion about the pros and cons of any future trade agreements, while Johnson himself has given out mixed signals about what he wants to achieve.

"Johnson will have to decide whether to remain closely aligned with the EU, or diverge sharply," said Mujtaba Rahman, of the Eurasia Group. He added: "Crucially, Johnson will not be beholden to the 20 hardline Brexiteers in the European Research Group."

Johnson had promised to forge a Canada-style free trade agreement with the EU, which would give Britain greater freedom from EU rules but would involve more barriers and costs to trade. But campaigning at a factory in northeast England this week, he sought to reassure workers. He said his plan "protects supply chains, it means we leave the EU with our relationships absolutely intact, so that we have a zero-tariff, zero-quota relationship with the EU".

Tony Travers, a policy expert at the London School of Economics (LSE), said the Conservatives' success in manufacturing areas could force Johnson's hand. Early results suggest the party is taking a swathe of seats from the main opposition Labour party in its industrial heartlands. These "still have a large amount of manufacturing, production industries, some agriculture in them -- areas which if there was a hard Brexit, a no-deal Brexit, would be hard hit," Travers told AFP.

"It makes it more difficult for Boris Johnson now to deliver anything other than a softer Brexit." Whatever the deal, Johnson insisted he will get it done within a post-Brexit transition period scheduled to end on December 31, 2020 -- a very challenging timeframe. If he refuses to extend this period, independent experts suggest a limited trade deal is likely.

The prime minister meanwhile has repeatedly touted the prospect of a trade deal with the United States as one of the opportunities of Brexit. A decisive win "increases the chance of a speedyish free trade agreement with the US, allows him to make the concessions asked of him by the US, even if it upsets a fair few MPs", noted the CER's Sam Lowe. "Equally, it also buys him space to put it on the back burner for a while if he wants to."