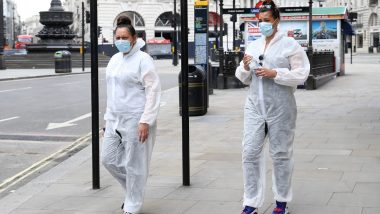 London, April 26: Another 1,712 people in Britain have tested positive for Covid-19, the lowest daily number since early September, according to official figures. This brings the total number of coronavirus cases in the country to 4,404,882.

The data were revealed after almost two weeks since non-essential shops and outdoor hospitality reopened in England. The figures released on the weekends are usually lower due to the delay in report in some regions. Meanwhile, more than 33.6 million people have been given the first jab of the coronavirus vaccine, according to the latest official figures. UK To Send Vital Medical Equipment to ‘Friend and Partner’ India To Help Fight COVID-19.

British Prime Minister Boris Johnson has acknowledged that the majority of scientific experts are of the view that there will be another wave of coronavirus at some stage this year and Britons must learn to live with the virus.

However, he said there was nothing in scientific data to suggest Britain would have to deviate from the roadmap out of lockdown. In England, all shops reopened from April 12 as lockdown eases, along with hairdressers, beauty salons and other close-contact services.

On May 17, restaurants and pubs are expected be allowed to resume indoor service and see most rules on gathering outdoors lifted. The British government's four-step plan is expected to see all legal restrictions in England being removed by mid-June. European Union Extends Support to India Amid Record Rise in COVID-19 Cases.

Experts have warned that despite progress in vaccine rollout, Britain is "still not out of the woods" amid concerns over new variants, particularly those first emerged in South Africa, Brazil and India, and the third wave of pandemic on the European continent.

To bring life back to normal, countries such as Britain, China, Russia, the United States as well as the European Union have been racing against time to roll out coronavirus vaccines.

(The above story first appeared on LatestLY on Apr 26, 2021 08:27 AM IST. For more news and updates on politics, world, sports, entertainment and lifestyle, log on to our website latestly.com).