US Elections 2020: How is The President Elected? What is The Electoral College? 5 Questions Answered

The prospects of Trump have not been completely ruled out as he may end up winning the big-ticket states which are represented by higher number of delegates at the Electoral College. Here are five questions and their answers to simplify the concept of how an American president is elected. 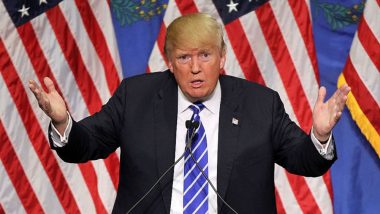 The November 3 poll battle is the penultimate factor to decide who will be the next US President. The ultimate decision will be taken by the Electoral College, the group comprising of 538 delegates with varying counts from each of the 50 provinces. The candidate backed by majority of the delegates ends up being announced as the next occupant of the White House.

The concept of Electoral College drew severe flak from detractors of Donald Trump in 2016, as he ended up winning the presidency despite losing the popular vote. In run-up to the 2020 presidential poll results, the few pundits that are predicting his re-election are expecting Trump to once again benefit from this electoral arithmetic. Israel Factor in US Elections 2020: Where Donald Trump and Joe Biden Stand on Conflict in 'Holy Land'.

The gap between Trump and rival Joe Biden, till 48 hours before the final day of in-person voting, hovered at around 7 percent -- according to the aggregate of major pre-poll surveys. The difference, say pollsters, is massive and unlikely to be overturned by the "silent majority" whom Trump considers his trump card in the high-stake battle. US Elections 2020 Poll Tracker: Advantage Biden in Swing States? Why Florida Matters The Most to Donald Trump?

But, the prospects of Trump have not been completely ruled out as he may end up winning the big-ticket states which are represented by higher number of delegates at the Electoral College. Here are five questions and their answers to simplify the concept of how an American president is elected.

What Is The Electoral College?

Electoral College, a body of 538 "formal electors", is recognised under Article II, Section 1, Clause 2 of the American Constitution. The electors represent their respective states. The key factor - which ends up determining the poll results - is that each state is represented by a different number of electors.

The delegate count per state is determined, among other factors, by the geographical size of the province and the strength of population that resides in the state. The biggest share of the pie is California, which sends 55 delegates to the electoral college, followed by Texas accounting for 38.

States such as Alaska, Delaware, the District of Columbia, Montana, North Dakota, South Dakota, Vermont and Wyoming each have three electoral votes each.

Is The US President Elected Directly?

Technically, no. Although the voters choose between the candidates in fray, they are actually voting for the delegates who pledge support to either the candidates (in case of independent nominations) or the party which has fielded the candidates.

In several provinces, the names of delegates is written below the name of party or presidential candidates. These delegates are elected to enter the electoral college if their respective party ends up winning the popular vote count of a state. The 538 delegates in the Electoral College decide on who would be the next President.

To win the presidential elections, a candidate must be supported by at least 270 delegates in the Electoral College.

The Electoral College delegates can not be Senators, House Representatives or any other Constitutional Office holders. But they are required to be pledged supporters of their respective parties. The laws in several provinces mandate them to vote strictly according to the popular vote count.

In past instances, as recent as in 2016, cross-voting has been witnessed. In the last presidential polls, seven delegates had defied their party whips. Such delegates are also referred to as "faithless electors", with law varying in different states proposing an array of penalties, including heavy fines to ban on their participation in future elections.

Which Are The Swing States?

Most of the 50 provinces in the United States are either bastions of the Democrats or the Republicans. However, eight to ten provinces are considered as perennial swing states due to their fluctuating electoral sentiment.

For instance, Florida, which accounts for 29 electoral college seats, swung in favour of George Bush in 2004, reverted to the Democrats when Barack Obama was the contender, and played a decisive role in powering Trump's victory in 2016.

The pollsters in the US have identified eight swing states this year which can go for a toss - though Biden holds the edge in at least six out of them. They are as follows: Pennsylvania, Michigan, Arizona, Florida, Ohio, Iowa, Wisconsin, Georgia and North Carolina.

Trump had secured 46.1 percent votes in the 2016 elections, as compared to Hillary Clinton who was backed by 48.2 percent. This makes the United States a unique democracy, where a candidate ends up winning the presidency despite losing the popular vote count by a significant two percentage points. In other words, nearly three million more Americans voted for Clinton as compared to him.

At the electoral college, however, Trump ended up winning 306 votes as compared to 232 bagged by Biden. This was due to his victory in the key swing states, including the big-ticket provinces of Florida and Pennsylvania. Trump was not alone who succeeded in winning the presidency despite losing the popular vote. His Republican predecessor George Bush had similarly chalked his way to the White House in the year 2000.

(The above story first appeared on LatestLY on Nov 01, 2020 10:32 PM IST. For more news and updates on politics, world, sports, entertainment and lifestyle, log on to our website latestly.com).