Israel Factor in US Elections 2020: Where Donald Trump and Joe Biden Stand on Conflict in 'Holy Land'

Trump's son-in-law and special advisor, Jared Kushner, has been hailed by several Zionist groups for the Middle East Peace Plan he unveiled in January this year. The plan - which virtually legalises all Israeli embankments in region of West Bank - has impressed a significant section of Israelis and boosted Trump's popularity in the region. 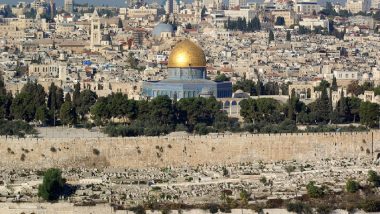 "Holy land", as the territory of Palestine and Israel is referred to by adherents of three major religions in the world, remains a factor in successive presidential elections in the United States. The far-right, as well as those ideologically centre-right, are considered to be in favour of strengthening Israel in a region where it is surrounded by Arab nations. Donald Trump Says Saudi Arabia to Normalise Ties With Israel Soon.

The Judeo-Christian unity, and the cause of Jerusalem, has long remained an unwavering commitment of the Republican Party. The Democrats have not largely differed, apart from occasional calls to protect the human rights of Palestinians.

However, the past four years have seen the rise of a Left-leaning faction within the Blue party, which is in favour of adopting a stern approach against the alleged rights' violations by Israel in the occupied territories. This group could have been bolstered in case of Bernie Sanders trumping Biden in the primaries.

In the campaign so far, both Trump and Biden have accused each other of betraying the cause of Israel. While the latter has accused the US President of subjecting Tel Aviv to a potentially more dangerous Middle East, Trump has accused Biden-Obama regime of adopting weak policies that eventually strengthened Iran -- whom Republicans accuse of posing a major threat to the existence of Israel.

The six major points below highlight how Trump and Biden differ in their stand over Israel, despite largely conforming to the decades-old American view on the conflict.

Trump's son-in-law and special advisor, Jared Kushner, has been hailed by several Zionist groups for the Middle East Peace Plan he unveiled in January this year. The plan - which virtually legalises all Israeli embankments in region of West Bank - has impressed a significant section of Israelis and boosted Trump's popularity in the region.

This was followed by Trump's recent success in formalising the peace agreement and establishing full bilateral relations between Israel and two Arab countries - the UAE and Bahrain. In the past week, a third Arab state, Sudan, also agreed to normalise relations with the Zionist entity in the region.

Speculations are rife that if Trump ends up winning the November 3 polls, Saudi Arabia would be the next to normalise the ties with Israel. This was indicated by Trump on Friday, as he told reporters in Washington that he expected the Saudi to follow up and "join soon".

While 2020 was the year when Trump's foreign policy appeared to have yielded major successes for Israel, 2019 would be remembered for the executive order that made America officially recognise occupied Golan Heights as Israeli territory. The year 2018 was historic for another reason, as the US finally decided to recognise Jerusalem as the capital of Israel and shift its embassy from Tel Aviv to the holy city.

The measures taken by Trump administration are viewed favourably by majority of Israelis, suggested a recent survey. The i24 poll suggested that 63 percent Israelis are in favour of another tenure for Trump, whereas, only 19 percent want Joe Biden to win.

The disenchantment among Palestinians with the American establishment is evident, but a section of their leadership is hopeful that a Biden presidency may allow them to return to the negotiating table with Israel. The Democratic Party's victory may also end up halting what the PLO describes as an "aggressive plan" to usurp the whole of West Bank.

Palestinian Authority Prime Minister Mohammed Shtayyeh, while speaking to reporters last week, had remarked "May Gold help us" if Trump wins another term. His remarks come in the backdrop of the virtual go-ahead received by Netanyahu regime from Washington to annex one-third of West Bank.

Reports earlier claimed that Israel would be speeding up the annexation process if Trump ends up losing the November 3 polls. Since the incumbent President's tenure will continue till January 20, the Netanyahu regime would aim to take control of large swathes of the West Bank before Biden's presidency begins.

As per the Middle East Peace Plan drawn by Jared Kushner, Israel is entitled to annex 30 percent of West Bank territory, while granting autonomy to Palestine in the remainder. This was publicly decried by Biden in May this year. "I do not support annexation," he was reported as saying. "Israel needs to stop the threats of annexation and stop settlement activity because it will choke off any hope of peace," Biden added.

The 'Left-Wing' of DNC

The Democratic Party has moved miles from start of Clinton's presidency to end of Obama's tenure. Since 2016, when the party was influenced massively by an "outsider" Sanders, it's ideological drift towards the Centre-Left has been catalysed.

As analysts say, a "Left-wing within the DNC" is altering the party's position on geopolitical conflicts, trade and climate issues. This was reflected when the 2020 Democratic Party Platform called for the creation of a "viable" Palestinian state -- with full rights for Palestinians to "govern themselves freely" as a sovereign entity.

Further, the Platform also called for "equal respect" to the human rights of both Israelis and Palestinians, while decrying attempts by either side to take "unilateral action". Democratic strategist Joel Rubin, who worked closely in the Bernie Sanders campaign, described the policy as "most realistic and progressive".

What the Democratic Party Platform enacted ahead of the electioneering phase drew applause from Palestine Liberation Organisation. Ambassador Husam Zomlot, Head of Palestinian Mission to the UK, said the statement is "promising" but falls short of referring to Israel's aggression as "occupation".

Democratic Rep. Alexandria Ocasio-Cortez, in June this year, circulated a letter among party leaders seeking support for her call to regulate military aid to Israel. The letter called for holding up of $3.8 billion aid if the Benjamin Netanyahu regime continues with its annexation plans.

While Biden reiterated that he is against the annexation of Palestinian lands, he was quick to clarify that he does not support any form of regulation to the military aid to Israel. According to a Foreign Policy report, the presidential candidate personally ensured that the DNC does not make any reference to Israeli action in West Bank as "occupation".

In the intertwined world of Middle East, a policy towards Iran is closely viewed from the prism of Israel-Palestine conflict. While Trump has been hailed by hard-liners for pulling the US out of 2015 Iran Nuclear Deal, Biden has decried the unilateral move. According to the latter, Trump has left Israel more vulnerable by walking out of the Joint Comprehensive Plan of Action (JCPOA).

Biden, in September this year, accused Trump of adopting a foreign policy which is "dangerous for Israel". By leaving the JCPOA, he has allowed Iran to skip the checks that barred it from developing a nuclear arsenal, the former VP said.

"He’s allowed Israel’s foes to take residence in Syria," Biden added, referring to Trump's decision to apparently allow Russia to take the upper hand in resolving the conflict in Syria. This has allowed Iran, an ally of Russia, to enter into key positions in Syria, which borders Israel.

Finally, How American Jews View Both

The opinion of American Jews is in stark contrast with their Israeli counterparts. A poll commissioned by the American Jewish Committee last week suggested that 75 percent would vote for Biden, as compared to only 22 percent who were in favour of backing Trump.

In terms of approval ratings as well, 77 percent among the respondents believed Trump is not taking the country into the right direction. Only 22 percent expressed satisfaction with the incumbent President's work. The poll was conducted between September 9 to October 4 by SSRS company on a sample of 1,334 US Jews.

On US-Israel relations, 54 percent among the respondents said Biden would perform a better job. 42 percent, however, believed that Trump is more beneficial for strengthening the Washington-Tel Aviv bond.

(The above story first appeared on LatestLY on Oct 26, 2020 06:16 PM IST. For more news and updates on politics, world, sports, entertainment and lifestyle, log on to our website latestly.com).