US To Send Health Chief Alex Azar to Taiwan, Making it the Highest-Level Visit by US official in 4 Decades, In a Move Likely to Anger China 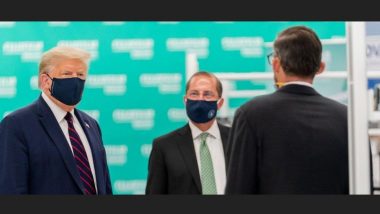 Washington, July 5: US will send cabinet member to Taiwan for the first time in six years. According to an AFP update, US Secretary of Health and Human Services Alex Azar will visit Taiwan in coming days, his office said on Tuesday, making the highest-level visit by a U.S. official in four decades, according to a Reuters report.

According to reports, this will be the highest-level visit by a US official in four decades in a move likely to anger China, which claims the island as its own. American Flag Lowered at US Consulate in Chengdu as Beijing Orders Its Closure Amid Cold-War Diplomacy.

US announces its "highest level" visit in decades to Taiwan

#BREAKING US to send cabinet member to Taiwan for first time in six years: Taipei pic.twitter.com/nUip0tBtZZ

Will visit #Taiwan in the coming days to convey @POTUS’s support for their global health leadership and to underscore our shared belief that free and democratic societies are the best model for protecting and promoting health.

The visit will likely create new frictions between US and China, which claims Taiwan as its own territory to be annexed by force if necessary. Taiwan is a prime irritant in the troubled relationship between the world's two largest economies, who are also at odds over trade, technology, the South China Sea and China's response to the COVID-19 pandemic.

(The above story first appeared on LatestLY on Aug 05, 2020 09:51 AM IST. For more news and updates on politics, world, sports, entertainment and lifestyle, log on to our website latestly.com).